Home > What we do > Dialogue
Back to overview

At NIMD, we believe that democracy starts with dialogue. We know from experience that when different political groups come together in dialogue – with each other, with civil society, or with their population in general – a country has a much greater chance of implementing reform, forging lasting peace, and cultivating a thriving inclusive democracy.

NIMD itself is the outcome of dialogue and cooperation between Dutch political parties from across the ideological spectrum, and all our programming and interventions are rooted in this belief in impartiality and working together for the common good.

Through our dialogue initiatives, we aim to build trust, collaboration and consensus between political parties and other political actors, forming the foundation of a respectful democratic culture.

At a time when inequality is growing and trust in state institutions is strained, building links between politicians and the people they represent is also a key goal of our dialogue work.

Our signature dialogue interventions can:

While there are challenges ahead as we see a trend towards shrinking democratic space, more single party dominance, and a weakening of opposition forces, our flexibility and depth of experience gives us room to evolve and innovate in rapidly-changing political landscapes.

We have extensive experience in creating and supporting political dialogue around the world, where we help cultivate safe spaces for political actors to work together in a respectful and inclusive environment. 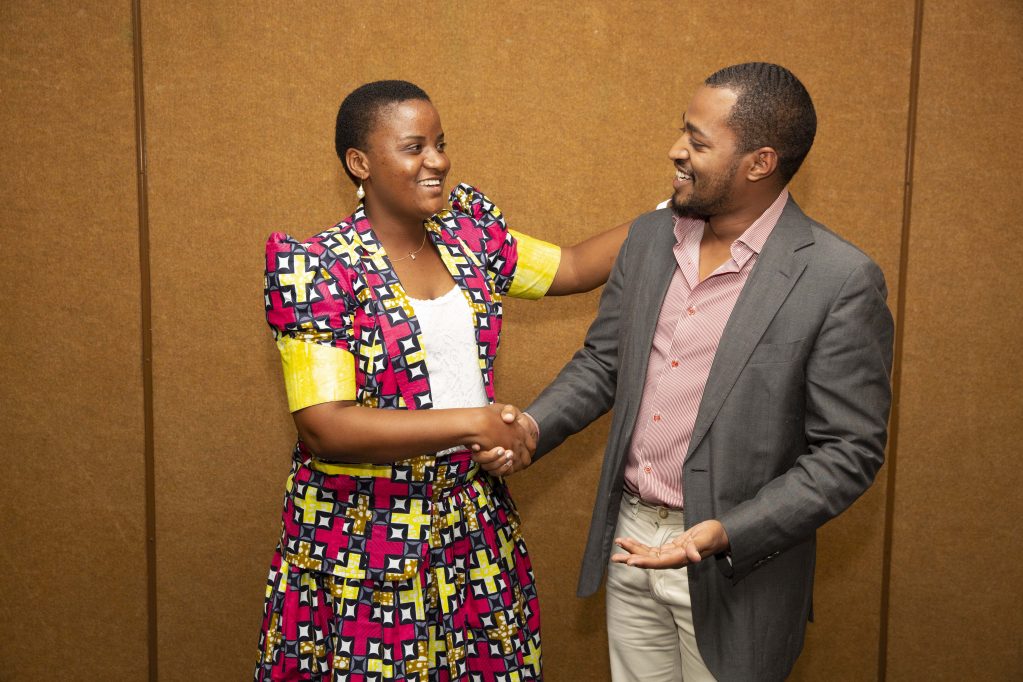 This can take different forms. While our dialogue work originally targeted political parties and government actors, our approach has broadened in response to changing political circumstances, and we now work to bring together politicians and civil society groups too. This means we can continue to have an impact at all levels of society.

A dialogue intervention is also always responsive to the specific needs and goals of the people we work with, and sensitive to political dynamics on the ground: a political dialogue can be a regular formal meeting involving senior politicians or a social event bringing together people from different sectors of society in an informal setting.

What makes our political dialogue approach unique is our commitment to impartiality: we give everyone a seat at the table, allowing us to build trust across political divides. 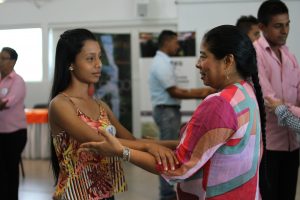 We have five signature dialogue interventions, which we deploy after extensive analysis and consultation with our target groups:

Inclusive laws have an immediate positive effect on democratic systems. They can set in motion systemic changes to empower underrepresented groups and remove obstacles to political participation. Take for example electoral laws that include a quota system for women, youth or indigenous people. These boost the inclusiveness of elections and give these underrepresented groups a direct opportunity to influence political decision-making.

An important aim of our dialogue initiatives is to support the adoption of inclusive legislation. Our dialogue initiatives aim to build trust, collaboration and consensus between political actors and other stakeholders. By working together long-term, and really listening to each other, these groups can put forward new laws, regulations, and policy changes that work in the interests of the population in general.

We do this not just through our political actor dialogue. NIMD also facilitates multi-stakeholder dialogues around legislative reform, bringing together political parties, members of parliament, Electoral Management Bodies and civil society.

And it’s not just about having the right laws on paper. In addition to our dialogue work, we work closely with Electoral Management Bodies (EMBs) to ensure effective implementation of inclusive electoral laws. For example, we help EMBs to plan their actions strategically in line with the election cycle, to ensure that their work is timely and effective. Find out more on our work with EMBs.

Dialogue in fragile and conflict-affected settings

When a country is tackling security issues, the political environment can be extremely polarized due to a lack of trust between political actors. NIMD’s strategies on political party dialogue are highly valued in these settings, when trust-building processes demand knowledge of the institutional context and the actors involved, combined with tactful diplomacy and high-end dialogue facilitation skills.

Based on our track record and multiple years of experience in political dialogue at the highest levels, NIMD and its network of international facilitation experts and trusted local partners facilitate dialogue between opposing sides, investing in building political trust and forging lasting peace. 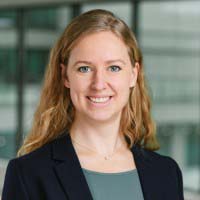 Nic van der Jagt contributes his expertise on project monitoring and evaluation to the Dialogue team, supporting the evaluation and analysis of NIMD’s signature dialogue interventions. 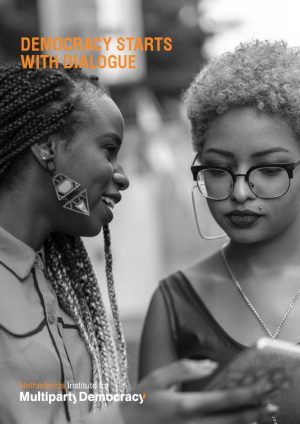 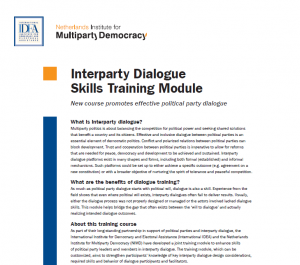 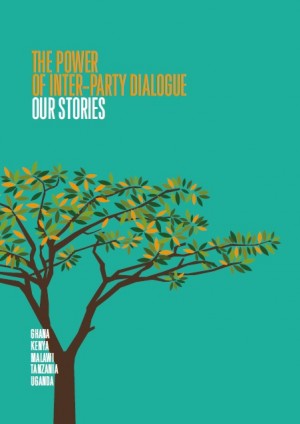 The Power of Inter-Party Dialogue: Our Stories
Read more 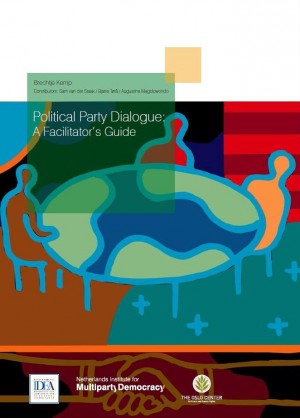 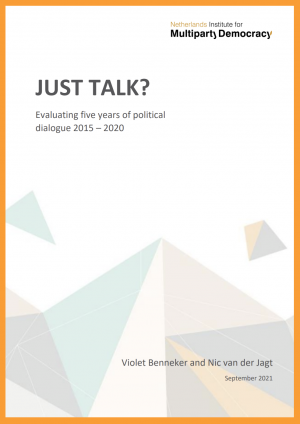