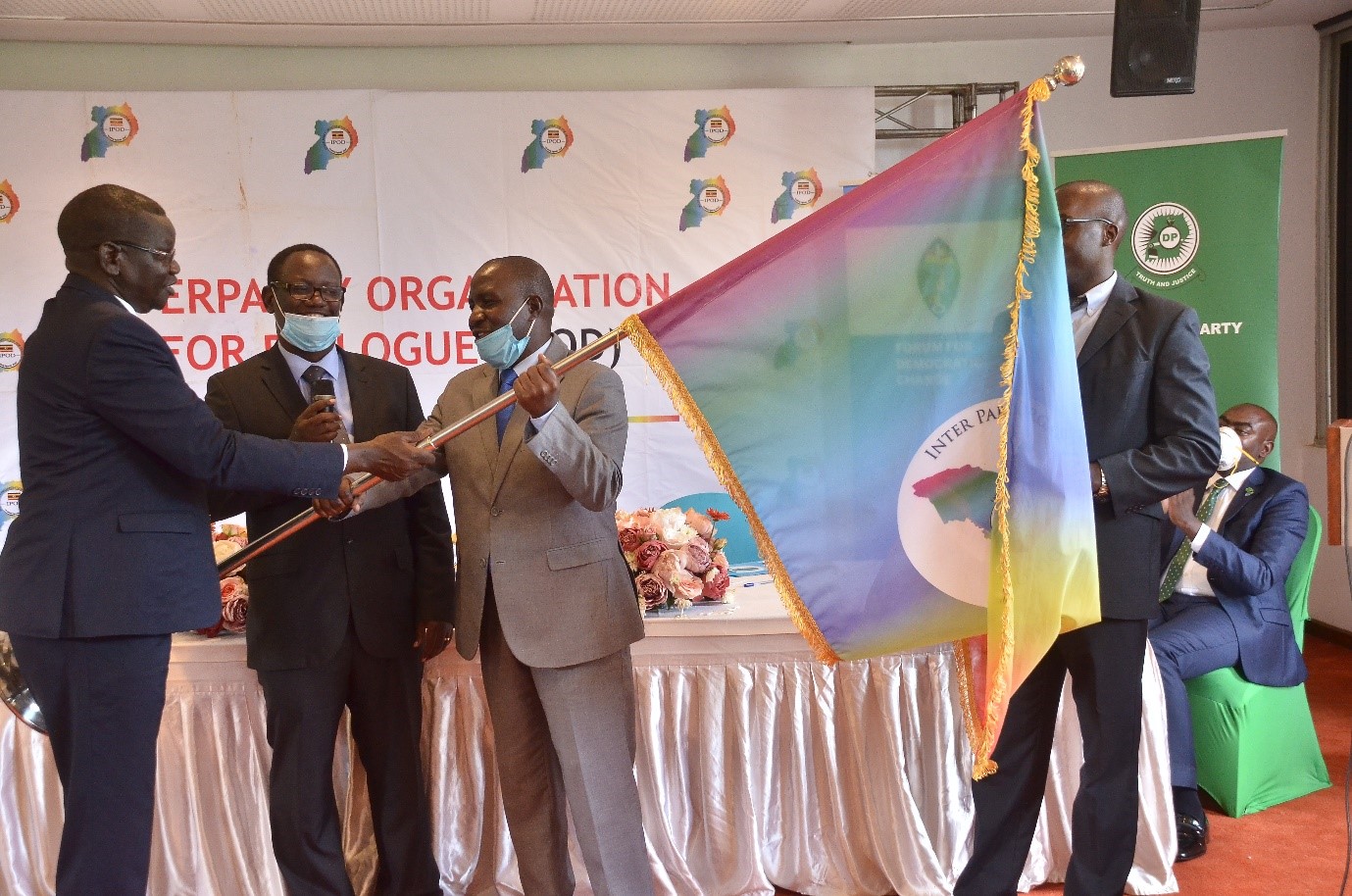 Last week, Uganda’s Interparty Organisation for Dialogue (IPOD), a dialogue platform for parliamentary parties facilitated by NIMD Uganda, marked another bi-annual rotation of its leadership. The IPOD Chair position passed from Uganda’s biggest opposition party, the Forum for Democratic Change (FDC), the to the Justice Forum (JEEMA). The FDC and JEEMA were joined at the ceremony by other senior party members of the Democratic Party (DP), and the Uganda People’s Congress (UPC), and the ruling National Resistance Movement (NRM), including party Presidents and Secretaries General.

How the IPOD Platform Works

IPOD has been active in Uganda for several years, offering parliamentary parties a common forum for discussions, training, and collaboration. It oversees an interparty dialogue process which aims to provide a safe space for every parliamentary party – no matter its size – to participate in dialogue as equals. Following this principle of equality, the Chair position of IPOD rotates alphabetically between its members on a 6-monthly basis, ensuring each party gets a chance to shape the IPOD agenda.

This pattern of shared responsibility has allowed IPOD member parties to build trust and take action on issues of the day. For example, discussions between party leaders in 2019 led to united action on the Public Order Management Act (POMA), a controversial piece of legislation that was seen by opposition parties as a hindrance to their rallies and other legitimate activities. This type of dialogue, that can facilitate parties building shared positions, is what sets the trend for long-lasting democracy.

Speaking at the ceremony, the former IPOD Chair Hon. Nandala Mafabi (FDC) thanked NIMD and its partners for their continued supported in strengthening Uganda’s democracy. He highlighted the achievements during FDC’s 6-month leadership of IPOD, such as the constitutional court ruling nullifying POMA and a successful peer visit to South Africa. Mafabi called on the incoming JEEMA leadership to strive for the effective implementation of the many resolutions successfully agreed through IPOD organs.

In his remarks, NIMD Country Representative Frank Rusa emphasized the importance of interparty cooperation in strengthening democracy in Uganda. He commended the outgoing leadership of FDC for raising the profile of IPOD through, among other things, leading the IPOD Secretaries General as part of the National Taskforce on COVID-19 at the onset of the pandemic.

Mr Rusa acknowledged the level of growth and maturity at the platform, especially in setting aside political differences and rallying together to find solutions to offset the effects of the pandemic.

Assurance from the new IPOD Chairman

The incoming Chairman of the IPOD summit, Hon. Asuman Basalirwa expressed gratitude to NIMD, which acts as the IPOD Secretariat, for its several years of work promoting political dialogue in Uganda. He vowed to use his long institutional memory in IPOD to guide the platform and ensure that there is another Leaders’ Summit during JEEMA’s 6-month term. Basalirwa said this was crucial in order to deal with a number of issues affecting political parties in the run up to the next general elections, which are scheduled to take place in February 2021.