Home > News > Report Launch: Including Women in Peace Processes is a Fundamental Human Right
Back to overview

Report Launch: Including Women in Peace Processes is a Fundamental Human Right

Efforts to include women in peacebuilding and reconciliation must move beyond tokenistic gestures and recognize the fundamental right of women to participate, panelists at the launch of our new report into gender and peace have agreed.

Speaking at a series of panel events marking the launch of Women, Peace and Security: Pillars of Peace, representatives from Myanmar, Burundi, the Netherlands, Colombia, Northern Ireland, the US and the UK shared their insights into the challenges of achieving genuine gender representation.

“The participation of women in peacebuilding and peace processes can’t be treated as a box-ticking exercise,” said Sangeetha Navaratnam-Blair, the Policy, Advocacy, and Communications Manager at Gender Action for Peace and Security (GAPS) Network and author of the report. 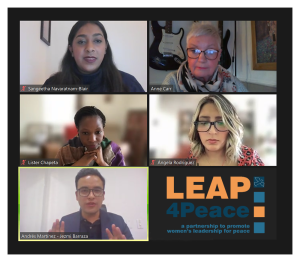 Beyond tokenism to genuine participation

May Sabe Phyu, Director of the Gender Equality Network (GEN) Myanmar, said that during peace talks in Myanmar, women’s participation was often one-dimensional and did not reflect their broad experience, skills and competencies.

“In the Myanmar peace process, the male actors tend to downgrade women as those who can only talk about victimization of women and girls, no more,” she said.

“But women peacebuilders bring to the table not only the issue of women and girls, they can strategically add value to the discussions about land and natural resources, conflict, security, and reform with a gender lens.”

Many of our panelists spoke out against the tokenistic inclusion of women. Petra Stienen, a Member of the Dutch Senate and expert on gender and foreign policy, said that all too often she had seen an approach she described as “add women and stir”.

“In peace negotiations, they are put in the room next door,” she said. “But as we know, when you are not at the table, you are on the menu, and we need to be at the table.”

For Ángela Rodríguez, the Executive Director of NIMD Colombia, one of the main barriers to women’s inclusion in political processes was the shocking level of violence directed towards human rights activists and female politicians in the country.

Lister Chapeta, Gender and Mediation Policy Specialist at UN Women, raised similar examples of violence against women in Afghanistan, and juxtaposed that with their invisibility in peace talks.

“We documented a record number of women being killed in the country in 2020, including civil society activists, journalists, academics, vaccinators and even women judges,” she said. “And yet Afghan women were not included among the negotiators with the Taliban in 2020.”

Discussing the solutions, both independent consultant Marguerite Bukuru and Anne Carr, a women’s rights activist and community coordinator from Northern Ireland, pointed to the huge benefits of a support network among both family members and other women’s organizations.

“Nothing about us without us – that is a slogan to remember.”

“Good networking pathways are really important and we have to ensure that they are sustained,” Anne said. “We need to provide resources to ensure that women from all walks of life and backgrounds are supported to be visible and heard, and that the design and development of those processes include all women.

“Nothing about us without us – that is a really good slogan to remember.”

Sangeetha urged anyone interested in furthering the genuine participation of women in peace processes to consult the recommendations in the new paper produced by LEAP4Peace, a consortium of the Burundi Leadership Training Program (BLTP), the Gender Equality Network Myanmar (GEN), Gender Action for Peace and Security (GAPS) and NIMD.

Download and Read: Women, Peace and Security: Pillars for Peace