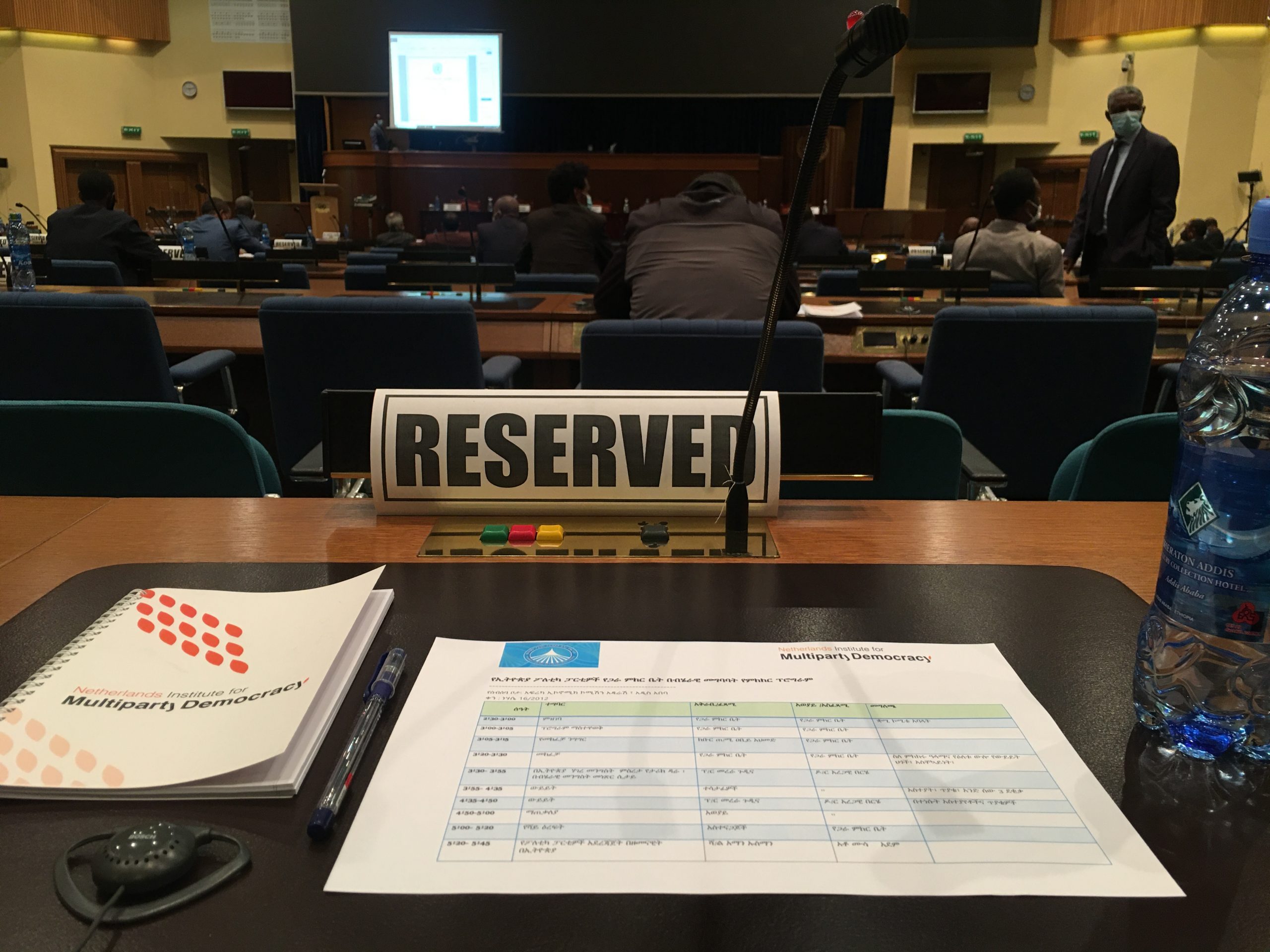 News
Charting a fresh course for interparty dialogue in Ethiopia

Since 2017, NIMD has been working with Ethiopian political parties on dialogue processes focused on building trust between politicians. However when COVID-19 hit the country in March, large in-person dialogue meetings were put on hold, and political violence reared its ugly head. This meant that new avenues for dialogue had to be found. An inclusive agenda needed to be agreed on, and parties needed the means to facilitate free and fair discussions safely during the pandemic.

Last week these efforts came to fruition when the Ethiopian Political Parties Joint Council (IPC) convened for a pre-consultation on resuming the national dialogue – its first meeting since March.

The IPC, founded in 2019, is a dialogue platform that seeks to facilitate good relations and the resolution of disputes between political parties. The main way the IPC does this is by providing support for the Ethiopia Political Parties Dialogue (EPPD), a process led by the National Electoral Board of Ethiopia (NEBE).

Last week’s meeting, a pre-consultation to prepare for the resumption of national dialogue through EPPD, was attended by 97 people drawn from political parties, civil society organizations and the media. Senior officials from the ruling Prosperity Party and the government attended the meeting.

IPC Chair Mussa Adem opened the meeting by stressing the need for all to contribute to sustainable peaceful political dialogue to realize a better future of Ethiopia. He was supported by Dr. Aregawi Berhe and Mr. Girma Bekele, also from the IPC, as his co-moderators.

The meeting came amid a backdrop of occasional outbreaks of political violence, such as in response to the death of activist and Oromo Singer, Hachaalu Hundesa. It is widely acknowledged that there is an urgent need to re-vitalize the national dialogue among the political actors; in particular the political parties. It is hoped this will help forge national consensus on Ethiopia’s most pressuring political issues.

In a separate meeting a few weeks earlier, Ethiopia’s Prime Minister and political parties had agreed to the establishment of an agenda-setting committee on identifying the most pressing political issues in the country. The committee’s findings are then intended to serve as an input to the agenda of the IPC’s national dialogue that is now expected to be resumed before the end of 2020.

Last week’s pre-consultation saw the results of the committee’s findings, as three of the seven identified national issues were presented and discussed, with more pre-consultation meetings on the remaining topics scheduled for the coming weeks.

The three research topics discussed in this first meeting were:

This agenda also led to discussions on key divisions in Ethiopian politics, such as that between  ‘Pan-Ethiopianists’ and ‘ethno-nationalists’. Pan-Ethiopianists view Emperor Menelik (Ethiopia’s ruler from 1889-1913) as the father of modern Ethiopia, whilst for ethno-nationalists he is an architect of subjugation particularly in the areas where Oromia and the Southern regional state. Having the chance to freely discuss such defining issues is key to securing consensus the IPC seeks.

How NIMD Ethiopia supports the IPC’s preparations for national dialogue

Through its EU project funding, NIMD Ethiopia is offering financial and logistical support to the successful completion and publication of the seven research studies and the pre-consultation meetings. In addition, NIMD Ethiopia has in-house capacity-building competencies on dialogue facilitation & mediation, and provides advisory services to the IPC moderation team throughout this pre-consultation process.

The IPC’s pre-consultations continue until 6 September. Thereafter, NIMD will continue to provide the same type of support to the IPC in conducting further preparatory works to establish an effective framework for an inclusive national dialogue process. We hope that this dialogue through the EPPD can resume before the end of the year.