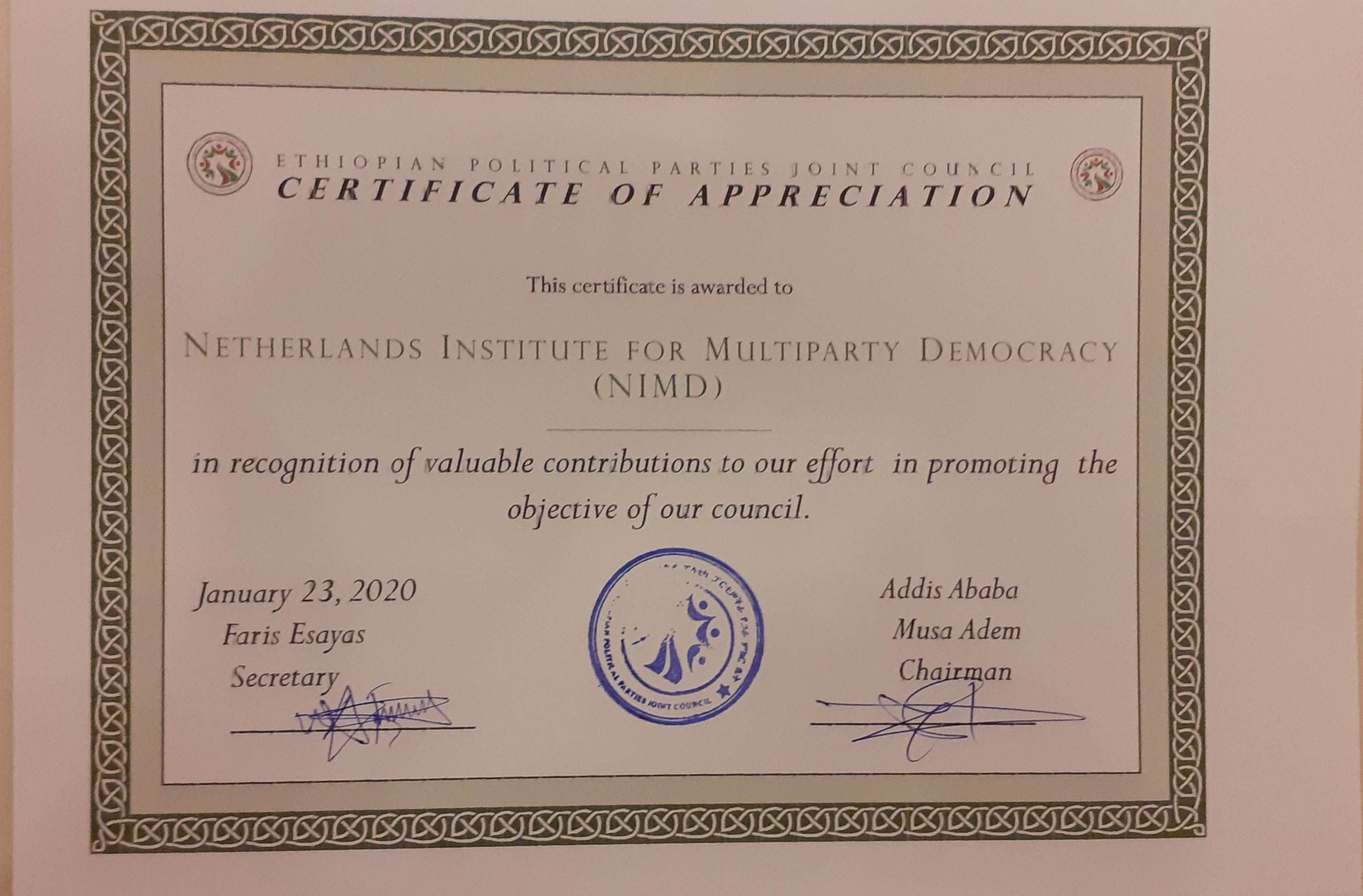 NIMD is proud to announce that our Ethiopian team has been presented with a certificate of recognition by the Ethiopian Inter Party Council (IPC). The certificate of recognition came following our support for the EU-funded dialogue that is being implemented by NIMD Ethiopia. NIMD’s Country Representative, Assefa Fiseha, and our External Advisor Shaun Mackay were present at the meeting in Addis Ababa to receive the honour in person.

NIMD is very pleased to have received this recognition from the IPC, and we are honoured to be part of the democratization process in the country.

We are especially glad to be receiving this vote of confidence ahead of the opening of the Ethiopian Democracy Academy, which will welcome its first cohort of multiparty students later in the year.

What is Ethiopia’s Inter Party Council?
The Inter Party Council (IPC) is a political forum that seeks to give representation to all political parties. Established in 2019 as a result of interparty dialogue, its aim is to ensure peaceful and amicable resolution of disputes between political parties based on the party code of conduct that Ethiopian parties, including the ruling prosperity Party (known then as EPRDF), signed in 2019.

The IPC supports the Ethiopia Political Parties Dialogue (EPPD), a process led by the National Electoral Board of Ethiopia (NEBE). With its responsibility for parties’ adherence to the code of conduct, the IPC will play a crucial role in the dialogue process and how parties interact with each other – both inside and outside the EPPD process. During the process, the IPC is also meant to address inter party disputes and misunderstandings before, during and after elections.

How NIMD supports the IPC

The certificate of recognition was presented to NIMD in acknowledgement of our support for dialogue in Ethiopia. Since Summer 2019, NIMD has been working closely with the IPC and NEBE, supporting the EPPD process. So far NIMD is providing technical assistance to the political dialogue on electoral and political reforms, and is supporting NEBE’s review of its civic voter education programmes and strategic plans.

We also support the technical capacity of the IPC itself, and NIMD provided training to 25 members of the IPC on Dialogue and Conflict Resolution in December last year. This capacity strengthening was made possible with funding from the European Union.

Why democracy support matters in Ethiopia

Credible and inclusive elections are, NIMD thinks, the key to sustainable development. By working with parties and supporting the national dialogue processes in Ethiopia, we aim to encourage parties and political actors to build the trust that can facilitate fair and honest elections.

With elections scheduled for later in 2020, dialogue platforms such as the EPPD are going to be crucial in maintaining trust between the parties. By working at the national level with IPC and NEBE, NIMD hopes to help strengthen that trust between parties.

Read more about NIMD’s work in Ethiopia on the Ethiopia Programme Page.