“Democracy develops slowly over the long term and there are often steps back as well as steps forward.” Hans Bruning, Executive Director of NIMD, reflects on 2014. “There have been positive developments such as in Tunisia, the one lasting success story from the Arab Spring, where they have approved a new constitution which has been widely praised as one of the most progressive in the Arab world and which includes the creation of a Constitutional Court. There’s also Myanmar which despite many challenges has seen further progress towards democracy in 2014 and where there is the prospect of genuine free and fair elections in 2015.”

“However, it has not been good news for democracy everywhere. In Egypt the government has continued to suppress democracy in a number of ways including banning the leading opposition party and repeatedly postponing the parliamentary elections. Egypt has also been enforcing an old law which gives it the power to restrict the activities of non-governmental organizations. Azerbaijan introduced a similar law in 2014 and Uganda is considering introducing one too.” 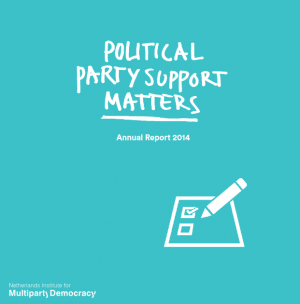