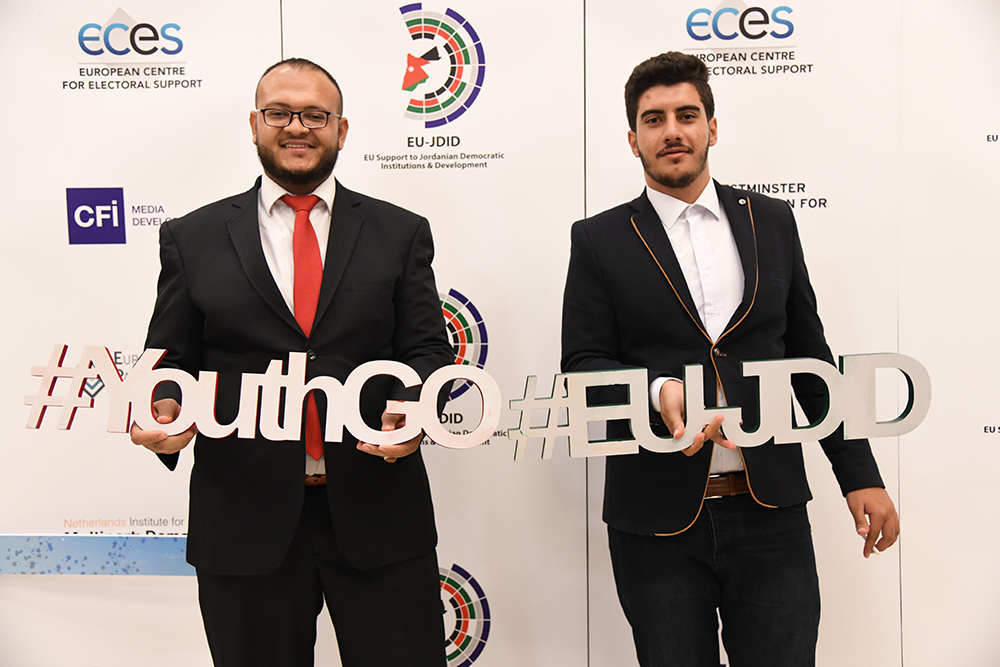 As part of the “EU Support to Jordanian Democratic Institutions & Development (EU-JDID)” programme, NIMD is actively working to support a gradual democratic transition in the country. EU-JDID aims to accomplish this through initiatives which support the functions of Jordan’s House of Representatives and Independent Electoral Commission, as well as providing assistance to political parties. Recently in Amman, we saw the latest results of our important work in Jordan as 60 people graduated from the Strengthening the Capacity of Young Political and Civic Actors Trainee Programme.

The EU-funded programme will benefit 220 youth participants though four annual political training programmes, which consist of ten monthly sessions. Experts in the field of political science are invited to lead the course, teaching classes on topics including policy analysis, political communications, democratic theory and debate techniques. The course also has a heavy focus on the involvement of women and young people. Each of the ten full-day sessions is split evenly between theoretical discussion and practical application. Organizers hope that with these skills at their disposal, the graduates can more effectively campaign for causes that matter to them and their communities across Jordan.

The graduation ceremony was hosted by The Ministry of Political and Parliamentary Affairs (MOPPA), in cooperation with the European Union (EU) and EU-JDID. The event featured speakers, debates and a reception afterwards; see more in the below image gallery. Aseel Yousef Sha’ban, Technical Advisor on Political Party Affairs at NIMD Jordan, stated “the aim of the programme is to strengthen the youth’s role in political activity, as 70% of the population is under 30, and yet the Kingdom witnesses very little political contribution from this age group.”

Baker Abbadi, a Jordanian activist and current secretary general of the MOPPA, said that this kind of training is invaluable in contributing to political discourse that is not “destructive“ or plagued by people “spreading false information“.

What next for the training programme?

Michael Steffens, the EU’s delegate to Jordan, added his support for EU-JDID and its remarkable work in recruiting over 100,000 women to online political awareness programmes. However there is still room for improvement ahead of next year’s programme, as Yousef Sha’ban pointed out that “out of the 47 registered parties in the Kingdom, only 16 were present.”

What is the EU-JDID programme?

On top of the youth education programme, NIMD is contributing in the form of parliamentary support, electoral assistance and support to the political party system. This targeted approach is designed to aid the long-term establishment of trust in political actors and institutions, a central pillar of the UN Sustainable Development Goals (SDGs).

If you would like to know more about NIMD’s projects in Jordan and the wider Middle East, visit the project page or email us.