Home > News > WOMEN WHO LEAD: GLORIA NÚÑEZ, A CHAMPION OF GARÍFUNA WOMEN IN GUATEMALA
Back to overview 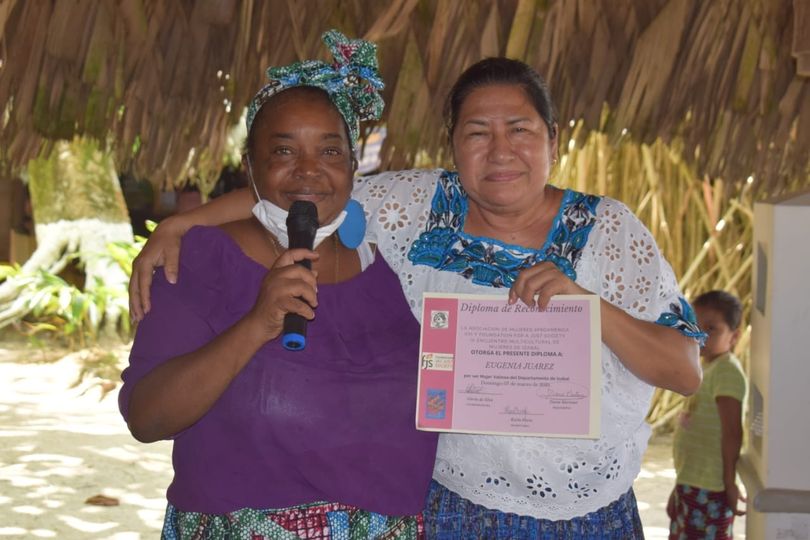 WOMEN WHO LEAD: GLORIA NÚÑEZ, A CHAMPION OF GARÍFUNA WOMEN IN GUATEMALA

Across the globe, there are female leaders who break down barriers at the highest levels of politics, making headlines with their achievements and the historical prejudices they overcome. We have celebrated many such milestones in the past year, including the first woman elected President in Honduras and the first woman appointed to lead the World Trade Organization.

This growing wave of female participation in politics goes beyond the high profile milestones. At NIMD, we want to mark International Women’s Day on March 8 by celebrating the women working tirelessly in their own communities to break the bias and ensure greater female participation at every level of society.

One such woman is Gloria Núñez, a 65-year-old from the Garífuna people in Guatemala.

The Garífuna are descended from African survivors of shipwrecked slave ships in the Caribbean in the 17th century, who integrated with the Carib community to create a culture embracing elements of West African and Caribbean tradition. The British exiled them from Saint Vincent the late 18th century, and they relocated to Central America.

“I am a Garifuna woman and I am valuable.”

Like many Afro-indigenous communities in Guatemala, Garífuna women face a number of barriers to political participation, including negative stereotypes, lack of resources, and limited access to the networks of power.

But Gloria speaks of a positive and happy upbringing in the town Livingston, home to large Garífuna community. 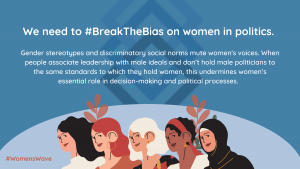 Gloria became a teacher, graduating from the Instituto Normal para Señoritas de Oriente, where she proudly recalls “there was never discrimination, there was always love”. However, from a young age she fought against the stereotyping of Garífuna women as overly sexualized, and their culture as one-dimensional and folkloric.

A determination to give back to her community

This interest in the social debate around Garífuna culture and its place in Guatemalan society led Gloria to become involved in leadership roles in her community. In 2012, she became a facilitator for the Shared Governance Programme implemented by NIMD Guatemala and the Italian Agency for Development Cooperation.

The aim was to train women from across Guatemala in leadership and share knowledge and exchange ideas about the principles of tolerance, impartiality, and inclusivity that underpin NIMD’s work. Gloria led dialogue programmes, and as well as developing her own leadership skills, the programme opened up new networking opportunities and helped her build relationships with authorities and international agencies.

Inspired by the NIMD programme, Gloria decided to give back to other Garifuna women the training and knowledge she had received. She undertook a Bachelor in Social Work and established an NGO, the Asociación Afroamérica XXI Guatemala, which encourages women to become involved in advocacy and citizen participation.

She also became a member of the Network of Afro-Latin American, Afro-Caribbean and Diaspora Women, opening up an international community of fellow activists. On Afro Women’s Day in 2021, Gloria met women from Colombia, Ecuador, Bolivia, Mexico, Honduras, Panama, Costa Rica and Guatemala.

By coming together over borders with a common aim, they were able to strengthen their movements and establish shared goals. “The human being is strengthened when they converge with the rest of society,” Gloria says.

Then in 2021, Gloria launched the first School of Political Training for Garífuna and Afro-descendant Women. So far, 50 women have graduated, supplementing their existing skills and knowledge with specific training in advocacy and political negotiation.

Gloria is delighted to be able to pass on her knowledge to a new generation, and share the opportunities she has had with other aspiring female politicians.

“Don’t put stones in front of us as obstacles; put stones along our way to strengthen us.”

With her first-hand experience, Gloria recognizes the barriers faced by women with political ambition.

“I remember on one occasion we went to a Mayor to make a proposal on behalf of women, and his response was ‘you sit down, I am the one who will give you the floor’,” she recalls.

Rather than letting such prejudice deter her, however, Gloria is motivated to continue her struggle for women’s equal participation, and urges others to do the same.

“Don’t put stones in front of us as obstacles,” she says. “Put stones along our way to strengthen us.” 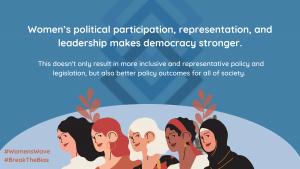 Looking to her own future, Gloria continues to lobby at the highest level of government for recognition of the rights of Garífuna and Afro-descendant women in Guatemala’s political framework. She is open to participating in decision-making positions herself, but only in positions that reflect her level of skills and experience.

“I have been approached several times by people who have offered me symbolic or tokenistic positions,” she says. “I have always said no, I want to be a trustee, or councilwoman, or run for election through the national list. To this day I am still waiting for a proposal.”

NIMD Guatemala has been delighted to accompany and support Gloria as she realizes her political potential. In 2022, we will be supporting Asociación Afroamérica XXI Guatemala in their training of more young women and their lobbying with political actors, and we look forward to working with Gloria in future as she passes her knowledge on to the next generation of Garífuna and Afro-descendant women.