Home > News > Tunisia’s Constitutional Referendum: A threat to Democracy
Back to overview 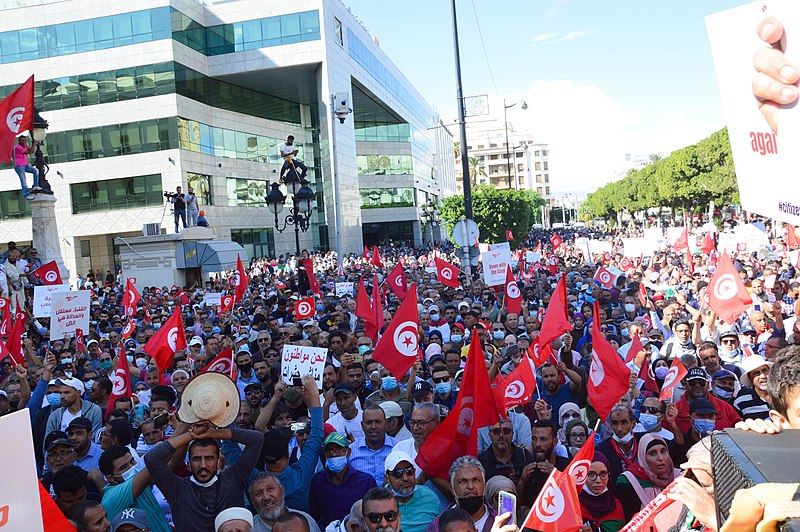 On 25 July, Tunisia held a Constitutional Referendum, giving the president sweeping powers while largely limiting the role of the parliament.

The opposition boycotted the referendum and almost 70% of Tunisian voters stayed home. While the low voter turnout casts serious doubt on the popular support for this new Constitution, President Kaïs Saïed is determined to push ahead, claiming that “Tunisia has now entered a new phase.”

This new phase poses a big threat to democracy. It effectively takes Tunisia back to where it was before the 2011 Arab spring.

Civil liberties no longer enjoy the safeguards that had been firmly anchored in the Constitution of 2014. The independence of the judiciary has been weakened.

And Tunisia will, for the foreseeable future, have a president with unchecked powers that far exceed what would be acceptable in any healthy democracy. The President can appoint and dismiss the head of Government as he sees fit. He can draft laws to be passed by parliament with ‘priority’. He can even directly amend the Constitution.

The country is back to a full presidential system, but one with very limited checks and balances.

Tunisia offers a grim lesson to all democrats worldwide. The democratic decline in the country suggests that it’s not enough to guarantee political rights in a democratic system with a strong parliament, as Tunisia has done since 2014. Neither is introducing checks and balances on institutions, which had been absent in the country up until then. The population of Tunisia expected more than these formal rights, inscribed in the Constitution.

The lesson of Tunisia repeats itself from Afghanistan to El Salvador, and from Mali to Burkina Faso: Democracy becomes an empty word when it allows every adult to vote, but only serves the interests of the happy few. When the formal aspects of democracy are in place but security, a basic need for all of us, barely exists outside the walls of the presidential palace. When politicians solemnly claim they defend universal values and rights, but forget that they are representatives of the people. Of all the people. That’s when the population starts to lose faith in the system.

The importance of young people

In Tunisia, the democratic decade that followed the Arab Spring did not bring the prosperity that people were expecting. Still today, youth unemployment in Tunisia is high, almost 40%.

The youth may have sparked the Arab Spring, but now, ten years later, some of them are applauding the strong hand of President Saïed. Many reject the other political leaders who, in their view, have spent their time quarrelling in Parliament without getting results. Others have simply turned away from politics altogether. Only 1% of young people voted this referendum.

But, amidst all the disillusion, there is also hope. In our work in Tunisia, we have had the opportunity to witness first-hand the ambition and dedication of many young Tunisians.

Over the past 10 years, NIMD has trained hundreds of young politicians in the country, together with our partners, the Centre d’Etudes Méditerranéennes et Internationales (CEMI) and Demo Finland. It was the youth’s enthusiasm and values of freedom and democracy that inspired us to start the programme in 2011.

As the political crisis hit the country, the programme’s focus changed, with more space for discussions on democratic values and the importance of respectful dialogue. This really resonated with the students. They were able to express their concerns, while at the same time experiencing the value of listening and taking on an inclusive approach. Today, they are critical citizens and politicians who have different views, but all stand up for democratic values and believe in collaboration across the political spectrum.

Democracy did not die in Tunisia last month. But the country’s democratic parties are faced with the tremendous challenge of regaining public trust. They will need to start listening to young people and engaging with them. The voice of young Tunisians is important. If they support and defend democratic values, Tunisia has a chance of staying on the democratic path.

Democracy is about commitment and dialogue. Everyone understands that true democracy takes time – paradise will not start the day after elections – but people want to be sure that their politicians work with them and for them. The first task of the democratic parties in Tunisia is therefore to listen to their (young) constituents. Their second task is to work with them and solve concrete issues together. That is how democracy grows.