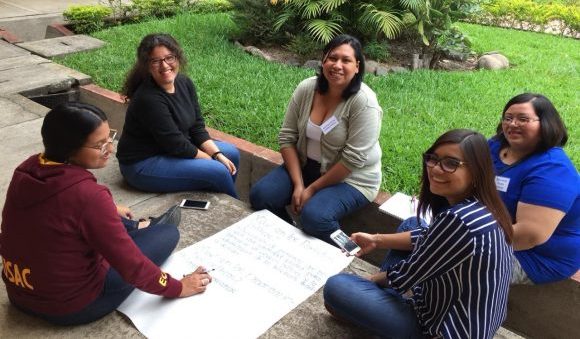 Towards inclusion and gender equality in Central America

The story below, by Jan-Albert Hootsen, is adapted and translated from the Vice Versa Special Edition on Gender. The special edition tells the stories of a diverse group of women from across the world. Despite political, social and financial pressures, these outspoken women remain tirelessly committed to an equal and inclusive society.

Central America was ill-equipped to cope with the Corona crisis when the region – along with the rest of the world – had to shut down public life in March of this year.

The region suffers the highest levels of poverty and violence in the western hemisphere.

Even before COVID-19 hit, the economies in these countries were fragile, with slow growth and hardly any job creation. With corruption and political instability adding to the mix, the pandemic was yet another formidable obstacle to democracy and development.

Without a doubt, this is a hard time to get involved in politics. But it’s a challenge that Alba Estela Zepeda and Vicenta Jerónimo take up with conviction.

Alba Zepeda is Deputy Mayor of La Ceíba, a port city in the north of Honduras, while Vicenta Jerónimo took up her seat in Guatemala’s Congress for the first time this January.

For both women, their introduction to politics in a region in which women are still chronically under-represented has been far from easy. 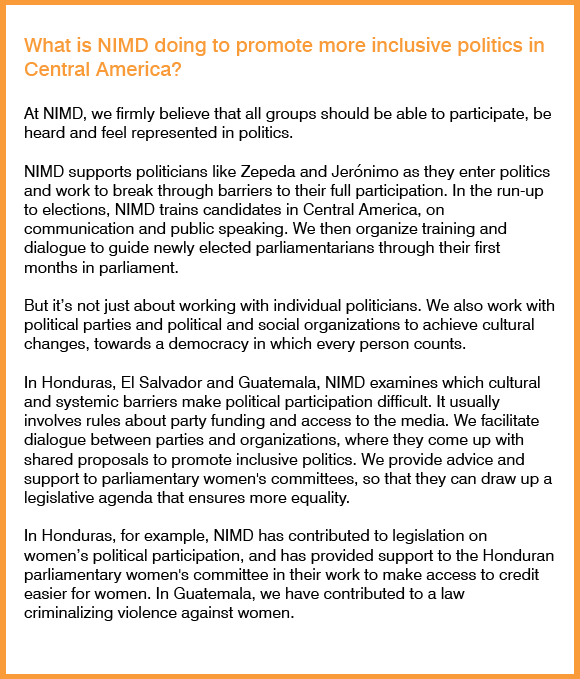 “La Ceíba is often called ‘the bride of Honduras’,” says Zepeda laughingly and not without pride. “We have many beautiful things here: beaches, nature, friendly people. The city is important for Honduras and tourism.”

With a population of around 200,000, La Ceíba is the capital of the province of Atlántida, the country’s third largest municipality. Despite its tourism industry, the city faces a continuous struggle with poverty, poor infrastructure and a lack of prospects, especially for its younger residents.

Taking up office in La Ceíba was therefore an exceptionally big challenge for Zepeda when she was elected as Deputy Mayor in 2018.

“The beginning was far from easy,” she recalls. “When we first started, much of the city had no electricity. There was no money – barely a thousand dollars in the municipal treasury. So we had to start more or less from scratch.”

More than two years later, she is proud of what she and Mayor Jerry Sabio have achieved. “We largely solved the problem with electricity within the first few months. Then we looked for solutions to the financial problems,” she says. “We were able to settle our payment arrears with the social insurance bank and provide social security to the population.”

It was Zepeda’s first time in public administration; her background is in education. She wasn’t immediately convinced when Sabio asked her to run with him. “I didn’t really know what public administration entailed. But I took the plunge when I saw how bad the local economy was; how badly things needed to change.”

“It was good that Sabio and I both have backgrounds in working with people,” she continues. “He was a doctor. I worked with young people. That created a bond that gave me courage to take on the challenge. ”

But she did set one condition for herself: no matter what, she would play an active role.

“In Honduras, people think that Deputy Mayors have little more than a supporting role, but I had no intention of sitting on the side and waiting to be told what to do,” says Zepeda. “I actively assist Sabio. I work a lot on the board and I am often the first contact to ensure that social programmes reach the right destination.”

La Ceíba badly needs such programmes. Poverty and daily struggles can lead to a general feeling of hopelessness, especially among young people.

Sometimes these people travel to the United States in the hope of finding work and a better life there. It is a perilous journey, thousands of miles across Mexico. Young people and girls are particularly vulnerable. They often end up victims of abuse and human trafficking.

“Many people feel that they have no choice,” Zepeda sighs.

“They face unemployment and lack of opportunities, so they leave without really knowing what to expect. That’s why we’re working with embassies and organizations such as the Red Cross and UNICEF.”

Unlike Zepeda, Vicenta Jerónimo, was already well versed in politics when she started her first term as a member of the Guatemalan Congress in January. She had been active for many years in social movements, fighting for the rights of the rural Maya population.

Her party, the Movement for the Liberation of the Peoples (MLP), finished third in last year’s presidential election. It was a historic achievement for a country in which the indigenous population has faced poverty, racism and exclusion for over 500 years. Jerónimo was the only MLP member to secure a seat in Congress.

“The first few months were difficult at times,” she says. “We knew we were going to participate in a parliament rife with corruption. Congress does not represent the people. It mainly represents the interests of a small minority of Guatemalans, the business elite. Indigenous groups make up the majority of the population. From the outset, we decided not to enter into alliances with the elite. I’m certainly not there to help them go against the interests of my own constituents.”

“I worked in rural communities, with farmers, landless people, day laborers and women,” she recalls. “Sometimes it meant travelling for 20 days solid.”

It was hard and potentially dangerous work. Jerónimo would sometimes come into conflict with powerful players, such as large international companies that wanted to exploit the land, at the expense of the native population.

From day one, she noticed that she had few friends in the capital. This was partly because of her political background. The MLP mainly represents rural communities – the Maya population, women and farmers. Its leftist ideology places it at odds with the multitude of conservative parties in parliament.

As a woman and indigenous person, for whom Spanish is a second language, Jerónimo also struggles with two of the oldest and most traditional evils in Guatemalan society: sexism and racism.

“Racism and machismo are still very much alive here,” says Jerónimo. “It’s difficult for me to even get the floor in a debate. Congressional rules clearly state that everyone should be allowed speaking time, but often I am simply passed over.”

Her views can also create clashes: “For me it is unacceptable that the political class, including the Congress, enjoy so many privileges, while sixty percent of Guatemalans live in poverty’, she says fiercely.

“When I started, I announced that I did not want to receive extra compensation for my expenses. Parliamentarians receive a salary but their food, life insurance, mobile phones and other devices are also covered. Why? We have a salary. I cannot look my constituents in the eye and defend getting paid for meals, when 60-70% of young children suffer from malnutrition in this country.”

For all of these reasons, it is difficult for Jerónimo and the MLP to leave their mark on national politics. The Government is pursuing a right-wing policy, aided by a predominantly conservative majority in parliament. The voice of Jerónimo and her party is often overlooked.

But, for Jerónimo, speaking out is a matter of principle and representation.  Decisions about her party’s agenda are made at gatherings in the Maya communities. It is this voice that Jerónimo is trying to make heard in Parliament.

“It is important that what I say and try to achieve in Parliament is always based on the consensus of our communities,” explains Jerónimo. “We drew up a programme of fourteen main themes, and we want to propose laws based on this agreement.”

Most of the themes relate to poverty, inequality and human rights. “We are now drafting a proposal to re-nationalize the public services that have been privatized in recent years,” she explains. “Guatemala’s problems stem from exploitation. That must stop.”

Both Jerónimo and Zepeda realize that their work sets an example in a country where machismo is still the norm. They both believe there is a long way to go before equality becomes a reality in Guatemala and Honduras.

“It is a constant struggle for us, as women, to find our place in public administration in Honduras,” said Zepeda. “We are not equally represented in politics.”

But Zepeda is optimistic: “A lot of progress is being made, there are more and more women candidates. And there are new electoral laws on quotas. But these laws must be implemented correctly.”

Vicenta Jerónimo equates the struggle for women’s rights in Guatemala with the struggle for land, and the rights of the indigenous population and the poor. “It is a struggle against capitalism, against the ideology of exploitation that has oppressed and sidelined farmers, women and indigenous peoples,” she explains.

“Change must come from within the population itself, not from the political class. That is why we will always continue to act based on what is decided by our supporters.”

“Most of all, I want to close the current period well,” says Zepeda firmly.

“So far, we have done well on both an administrative and social level. I notice that the people in La Ceíba are satisfied with us. I do not believe that having a political or administrative position should be an end in itself. It has to be a calling, something that I want to do, and that is consistent with my values. ”

Jerónimo says her role depends on her supporters. “When we talk about my political future, we are talking about the future envisioned by the peoples of Guatemala, whom I represent. They will determine if I can continue after these four years.”