Home > News > Strengthening local institutions in El Salvador: Dialogue and negotiation as a means towards deeper democracy
Back to overview 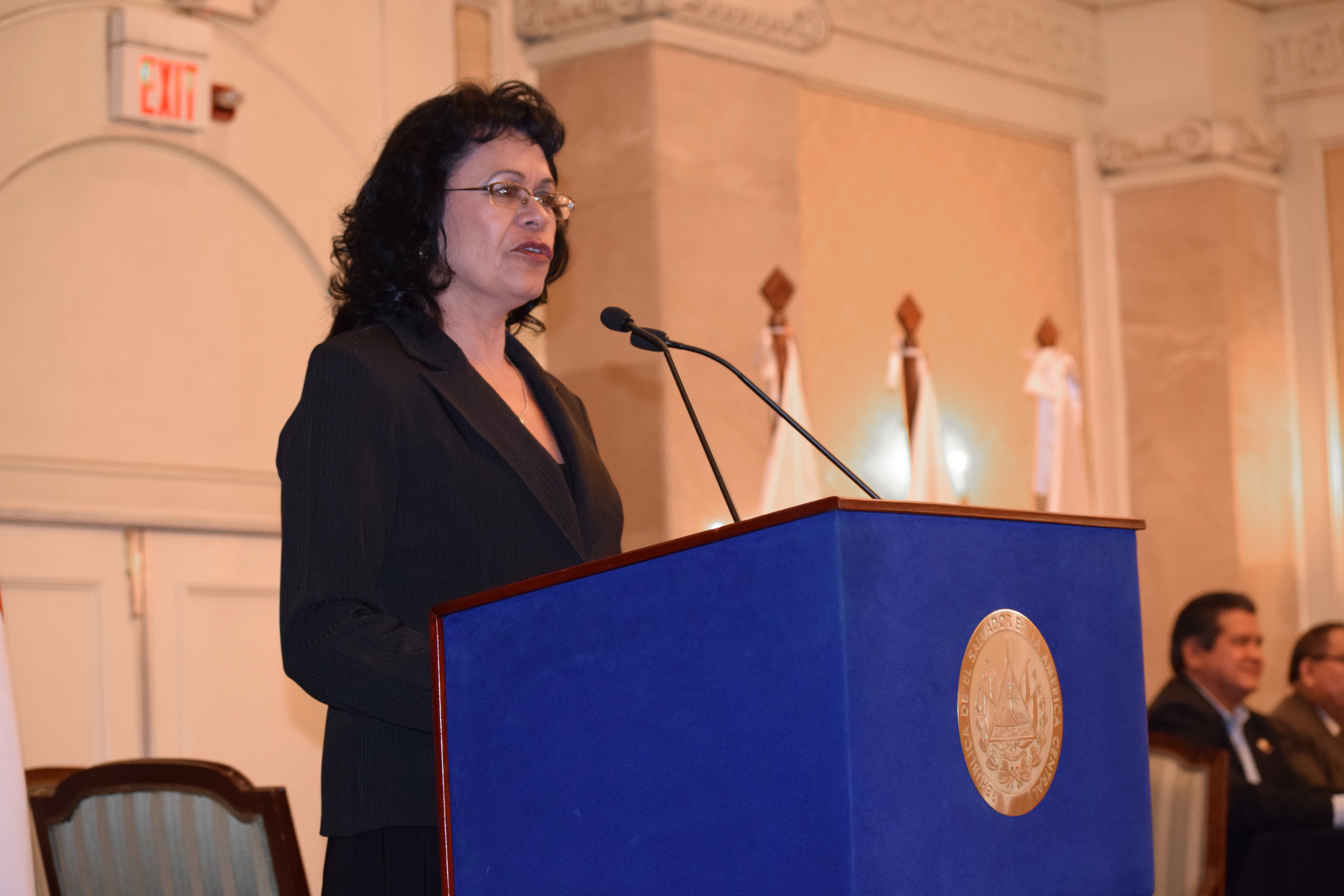 Strengthening local institutions in El Salvador: Dialogue and negotiation as a means towards deeper democracy

Ana Miriam Salgado Alvarenga is 56 years old, originally from the city of Santiago de María in the west of the small country of El Salvador.

She is the fourth of five children, with three older brothers and a younger sister. Her father was a motorist; her mother made and sold sweet treats made of coconut, a delicacy typical of El Salvador.

In 1995, she graduated in Computing. Long before that, however, when she finished high school, she started working in the field of local development.

That’s how she found her true calling as a municipal advisor on local development.

After university, she took up a role in the Local Development Institute of El Salvador (ISDEM) as an advisor for the eastern region of the country.

ISDEM is tasked with providing technical assistance and capacity building to El Salvador’s 262 municipalities. Currently, Ana Miriam is responsible for nine of these, and provides technical, administrative, financial and planning support to help them to better fulfil their roles and responsibilities.

When Ana Miriam first started her job, local goverments were elected through a first-past-the-post system; the political party who won a simple majority would win all the seats in the municipal council.

However, this system changed in 2015 and, for the first time in the country’s political history, municipal councils were made up of different parties.

But, despite the clear advantages that the multiparty setup offer for the country’s democracy and political culture, its implementation brings its own challenges.

Members of municipal councils, political parties and state bodies charged with providing capacity building and technical support worried the change, rather than strengthening municipalities, would hinder them.

Multiparty municipal councils could bring a risk of polarization, increased conflict and a heightened tendency to defect.

As a result of these concerns, NIMD decided to put preparations in place, both within the municipal councils themselves, and in its work with municipal advisors from ISDEM and the Corporation of Municipalities of the Republic of El Salvador (COMURES), in order to help them to cope with the change and constructively transform any conflicts which arose.

It’s in this context that the programme “Training facilitators of dialogue and political negotiation for consensus in the framework of the implementation of multiparty municipal councils” was launched.

The first phase of this programme targeted municipal advisors who worked on the national level, and was implemented in the capital, San Salvador.

The second phase, a pilot scheme, trained technical experts in 10 municipalities across the El Salvador’s four regions, who would then go on to share their knowledge with the municipal councils. In total, 36 experts were trained, 31 from ISDEM and 5 from COMURES, 18 women and 18 men.

Between them, these experts provide support for all of El Salvador’s 262 municipalities.

Dialogue and negotiation as key tools

Ana Miriam was one of the ISDEM participants. Her vast experience in the municipal field, her interaction with her colleagues, and her capacity and openness to new ideas set her apart throughout the training.

As part of her evaluation, Ana Miriam had to put her newly learned skills to the test. She facilitated a workshop on dialogue and political negotiation for consensus at a municipal council. 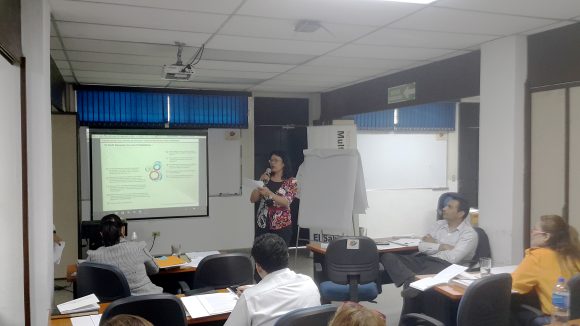 The workshop was a great success. The council members found it very relevant and effective in improving the atmosphere between them.

Specifically, they asked for her support to tackle a problem that they had encountered. Shortly before the session, the governing party had failed to consider the opposition when applying for a loan to carry out projects relevant to its own interests. This caused a conflict within the council, since such decisions should only be taken with a qualified majority by law (3/4 of council members).

Ana Miriam was aware of the sensitivity of this issue within the new multiparty context.

She took time to allow the participants to work through their differences through dialogue, negotiation and cooperation. Each participant had the opportunity to voice their opinion and suggest possible ways forward.

This new way of working together helped the participants to overcome their differences and the council approved the loan unanimously, allocating it to outstanding debts and a number of infrastructure projects in the common interest.

Ana Miriam received top marks for the assignment. Indeed, throughout the training, she showed real development and growth, and on the last day, she was nominated by her fellow graduates to give a speech in front of over 150 people. 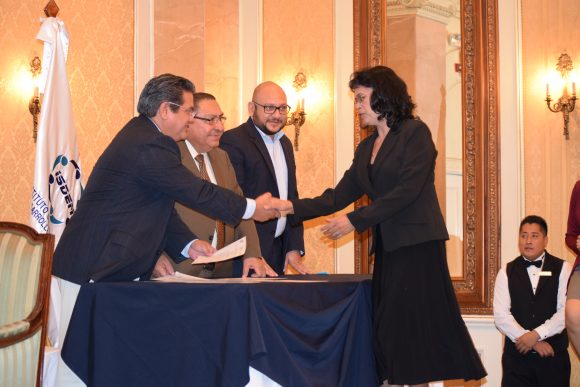 “I am optimistic about this programme and especially the way our facilitators have already been able to pass on their knowledge in certain municipalities. They are now able to continue to carry out their assessments using these methods with many more local governments in the country. This would not have been possible without the support we receive through an inter-organizational agreement with NIMD.”

Thanks to her newly acquired skills and knowledge, Ana Miriam has already been able to provide support to various municipalities on their request.

She has facilitated dialogue and negotiation processes in a number of municipal councils which, as a result of conflict, faced blockages in the approval of projects, strategic plans or even loans.

Following the training, Ana Miriam also feels better equipped to face challenges in both her working and personal life:

“The course has allowed me to be more open to criticism in my work, more open to what municipal councils might say. The increased clarity helps you to talk to them more easily. I have been able to resolve isolated cases in various councils.

On a personal level, it’s much easier to listen to family, resolve issues and help out in a more efficient way. One of the parts of my life in which it has been the easiest to apply what I have learnt is in my work with young people and adults as a voluntary basketball coach.

It’s easier now to sit down and listen and talk to them about the training. Before, I used to say ‘let’s do this or that’. Now, instead, I ask them what they think, whether something will benefit them. Before I told them what to do, now I listen.”

Considering the broader impact of her work, Anna Miriam reflects:

“Since I was 18, my main motivation to work in my field is the chance to support municipalities to resolve problems and build trust.

If municipalities are not strong, and the country doesn’t listen to the people’s needs on a local level, then there can be no progress. Things stagnate. If we don’t channel support then it doesn’t help anyone and there is no impact in the country. It’s crucial to work on a local level”.

Ana Miriam has become a firm believer in dialogue and negotiation as a means towards long-lasting agreements in personal life, with family and on the community, municipal and national levels.

Through NIMD’s support, Ana Miriam and many other municipal advisors are now able to work towards building a more democratic political culture and strengthening El Salvador’s political system through the successful implementation of multiparty politics at the local level.