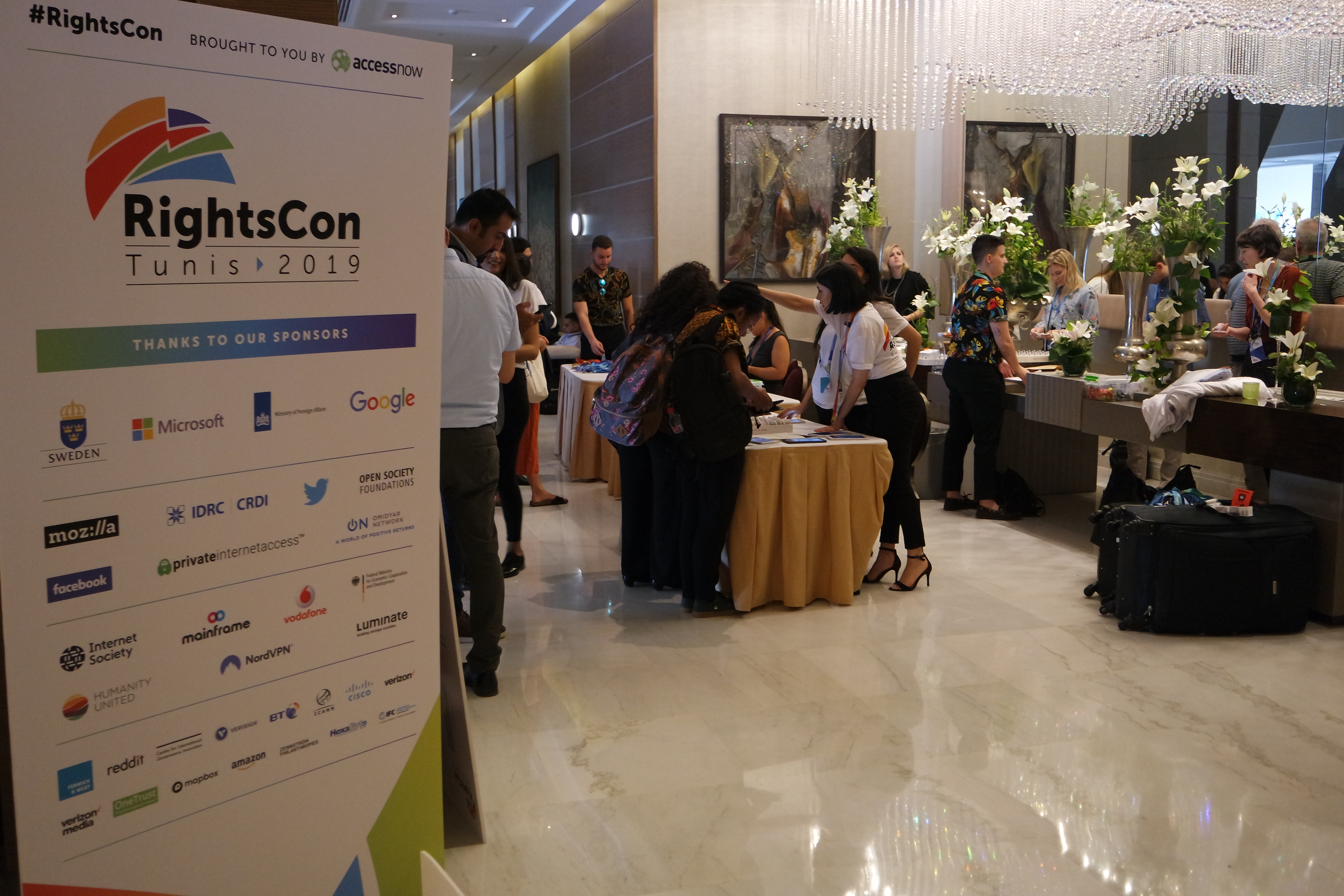 This week, NIMD’s Will Derks is in Tunis attending #RightsCon2019. As Innovation Advisor, he’s there to discover the latest ideas and inventions that can help us use technology to further democracy. Every day, he will be sharing the lessons learned and the stories of people he’s met while in Tunis. This is part 3 of his conference diary. Click here to read part 1 and part 2.

A good friend of mine – who shall not be named — found conferences often quite boring and he once defined hell as ‘a never-ending conference’. I suppose he was right; conferences can be boring and imagining oneself being at a mind-numbing conference for all eternity is a scary prospect indeed. But then, there are good conferences and bad ones. This is a good one. With the occasional tedious workshop, perhaps. But, as I suggested earlier, the RightsCon offers so much to choose from that there’s always something inspiring going on.

Or heartening, as was the case with VoTek. I picked that session not only because it was one of the few that seemed purely Tunisian – NIMD has a successful programme in this country, partnering with the Centre des Etudes Méditerranéennes et Internationales (CEMI) – but also because I have been interested for a long time now in digital platforms for participant-driven proposition development and decision making. VoTek is such a platform, amazingly enough developed by a group of young Tunisians in their early twenties. Their vision of tech for participatory democracy – especially on the municipal level in Tunisia – was refreshing, while their cheerful, enthusiastic presentation of the platform was contagious. Not surprisingly, however, I couldn’t resist the, well… fatherly inclination to admonish them and point out a number of pitfalls and dangers. But I am quite sure that their eager engagement with the fate of their country will help them to overcome most of these and make their endeavor successful. I wish them all the luck they deserve.

Every now and then one needs such glimpses of hope in what otherwise sometimes seems to be a gloomy battle between, on the one hand, a huge number of smaller and smaller NGOs scattered all over the world, and, on the other hand, a handful of gigantic companies in California. The conference is about human rights in the digital age, remember, and, at least since the Arab Spring in 2011, we have been cured for good from our techno-utopianism. Digital technology, we now know, is not just benevolent, it can also be very dangerous and able to fundamentally undermine our rights, our democracies, our societies.

Many sessions at the RightsCon dealt in some way with this tension and I was especially interested in those with run-of-the-mill titles such as ‘Political Ads on Social Networks: Tearing the Curtain of Opacity’, or, ‘It’s the Business Model, Stupid! Targeted Advertising and Human Rights’. What was discussed during such workshops is basically the enormous impact on everything and everybody of non-consensual data collection on a massive scale. The sessions go on to explore the subsequent micro-targeting, which influences our behavior from shopping to voting – a power that is sold to anybody who is willing to pay. In more narrow political terms: even though we know what happened, for instance, with Cambridge Analytica, digital political advertising is still largely unregulated. And even if there are laws in place, dodgy things can go on in cyberspace and politicians can play dirty online and still easily get away with it.

One of the main conclusions, therefore, was that protecting privacy is essential if we want to protect other human rights, and that is exactly what a number of these NGO-warriors focus on. Take for instance FuzzifyMe  – the name says it all! – or the 2019 Corporate Accountability Index by Ranking Digital Rights, which evaluates 24 of the world’s most powerful internet, mobile, and telecommunications companies on their disclosed commitments and policies affecting freedom of expression and privacy. This index shows that there’s still a long way to go, for companies and for governments, who have to get their act together and start passing 21st century laws to protect their citizens, their citizens’ rights and democracy, as well as making sure these laws are adhered to.

Of course, I have had to simplify here what is, in fact, very complex. If you want to dive deeper into this important topic, read the article ‘Targeted Advertising Is Ruining the Internet and Breaking the World’ by Nathalie Maréchal, senior research analyst at Ranking Digital Right, who was the shining star in these really scintillating sessions.

Now off to see more of this!