Home > News > Portraits of Courage in Colombia
Back to overview

Portraits of Courage in Colombia

NIMD Colombia runs Democracy Schools in some of the most volatile regions in the country, where activists frequently face violence and abuse. Here we profile three of the courageous young alumni, and find out their hopes for the future.

A version of this article appeared in Dutch in the Vice Versa magazine youth special.

In the far northern Colombian region of La Guajira, life can be tough for young activists. Close to Venezuela and the Caribbean Sea, organized crime groups are rife, and the instability and corruption means the economic potential of the area remains unfulfilled.

The majority of the population lives below the poverty line, but the people who fight for greater social equality and opportunity put their safety on the line every day. 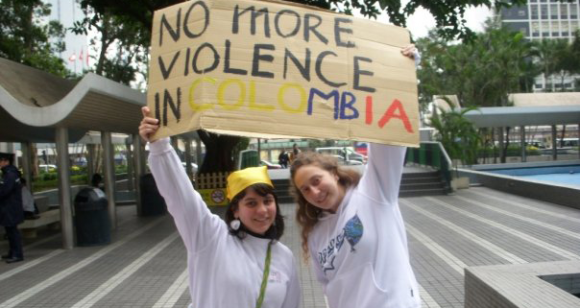 Violence against community leaders is tragically common. Despite a peace agreement between the Colombian government and guerrilla group FARC five years ago, more than 400 human rights defenders have been killed in Colombia since 2016.

But by coming together and sharing their experiences, a new generation of Columbian leaders are building their strength, knowledge, and skills.

In February 2021, NIMD Colombia and the European Union Election Observation Mission launched Democracy Schools in La Guajira and the nearby departments of Cesar and Córdoba. More than 170 young leaders have now been through their doors.

The students come from different ethnic backgrounds and political affiliations, encouraging people from across the ideological spectrum to come together in a non-confrontational setting and realize the strength of working together.

Despite the volatility, there is hope and optimism among the young activists, who are determined to continue the fight for a more just and equal world for all.

Here we meet three of the recent graduates:

Like many residents of La Guajira, 20-year-old Matteo Bullones Rojas is from Venezuela. He fled political and economic uncertainty in 2017, but as a trans man, he was also searching for a more tolerant and open society.

“I felt there was a freer culture here, with same sex marriage being legalized,” he explains. “From childhood, I never felt like a woman, and since 2019 I have started to call myself Matteo.”

“We need to get through the discrimination and be given the chance to excel.”

Despite Matteo’s hopes for tolerance, life is not easy as a trans person in La Guajira.

His personal experiences have inspired Matteo to become a community leader for fellow trans people in La Guajira. “There is a lot of potential in this group, but first we need to get through the discrimination and be given the chance to excel.”

To realize his ambition, Matteo is studying law – alongside a full time job and his community work.

“I work seventeen hours a day, often seven days a week, as a chef in a fast food restaurant, next to my law studies,” he explains.

Matteo feels one of his biggest contributions is simply being visible on the streets.

“It means that others know they are not alone,” he says. “Also, I help provide food aid to trans people and sex workers. We talk about the importance of medication, vaccines, the risk of HIV, and we hand out condoms. There is legal and psychological counselling for those who need it.”

Matteo hopes to use the skills he learnt at NIMD Colombia’s Dialogue, Innovation and Leadership School to inspire others.

“I want to help young people become leaders themselves,” he says. “One of my goals is to train other groups from the LGBTQI community so they can support each other.

“This country needs leaders who support an inclusive society in Colombia. That is how we prevent violence and reduce prejudice.”

Dana Esther Navarro, 21, understands the risks involved with activism in Colombia. Following in the footsteps of her grandmother, the young student has started working with a rural union called the Asociación Nacional de Usuarios Campesinos (ANUC).

The union has seen a number of its members killed, kidnapped and threatened.

“I’ve been through a lot, and my grandmother has also been intimidated,” says Dana, who works as an intern on a banana plantation alongside her studies.

“Five armed men came on motorbikes at three o’clock in the morning. They banged on the door and yelled for us to stop our work.”

“It is so important that we work together through dialogue.”

But the threat of violence has not deterred Dana from becoming ANUC’s youth representative in La Guajira. She hopes that through her work, she can help other young people in the region realize their potential, and attending NIMD Colombia’s Democracy School has given her the skills and knowledge to push ahead with her ambitions.

“I can teach young people a lot: how to protect your rights or the rights of others who cannot fight for them; how to ask the government for protection; how to write letters, file reports, and organize community actions,” she explains.

“It is so important that we work together through dialogue, and find ways to get things done without violence or threats.”

Dana cares deeply about the environment too, and hopes to contribute to a more sustainable future through her work at the banana plantation

“I monitor the use of pesticides, water, acids and oil,” she says. “I’m usually up working from five o’clock in the morning until nine o’clock in the evening. But we must protect our environment because no one else will protect it for us.”

She sees hope and optimism in the energy of the young people around her, and wants to use her skills to channel that energy into action at the government level.

“We, the youngsters, can achieve success,” she says. “We do our best, but the government must also help. When we fight for our rights we need to be protected, we don’t need to flee or be threatened.”

As a member of the Wayuu indigenous group, 28-year-old Yasser Romero is passionate about his community’s history and traditions – and protecting the environment in La Guajira is crucial to keeping those traditions alive.

His interest in local issues led him to become the ethnic secretary of a new political party, Dignidad, which formed in 2021 and is now active in twenty Colombian provinces.

“We work with trade unions, distribute flyers, file charges and fight against social injustice and discrimination,” he says. “We also keep an eye on the licenses: there are currently requests to exploit 97 percent of the natural resources in the region. You will find a lot corruption takes place, and there are threats to myself and my organization.”

Yasser hopes to use his activism – and his studies in law – to raise living standards in his community.

“In this region around 87 percent of Wayuu families live on less than fifty euros per month, and they often have eight to ten mouths to feed,” he explains. “There is a lot of malnutrition here. Many children have died in hospitals, often due to a lack of clean drinking water, partly because mining companies pollute the water.

“I also work for a feminist organization, where I am one of four men,” he adds. “We help teach single mothers about the importance of good nutrition and the use of contraceptives, and we share food and products for personal hygiene, sponsored by regional companies.”

“The human dignity of all must be protected.”

Helped by NIMD’s democracy education programme, Yasser hopes to realize his dreams of a more fair and equal Colombia, where every voice is heard.

“My dream for Colombia is that it becomes a fair country, without extreme inequality,” he says. “The human dignity of all must be protected.”