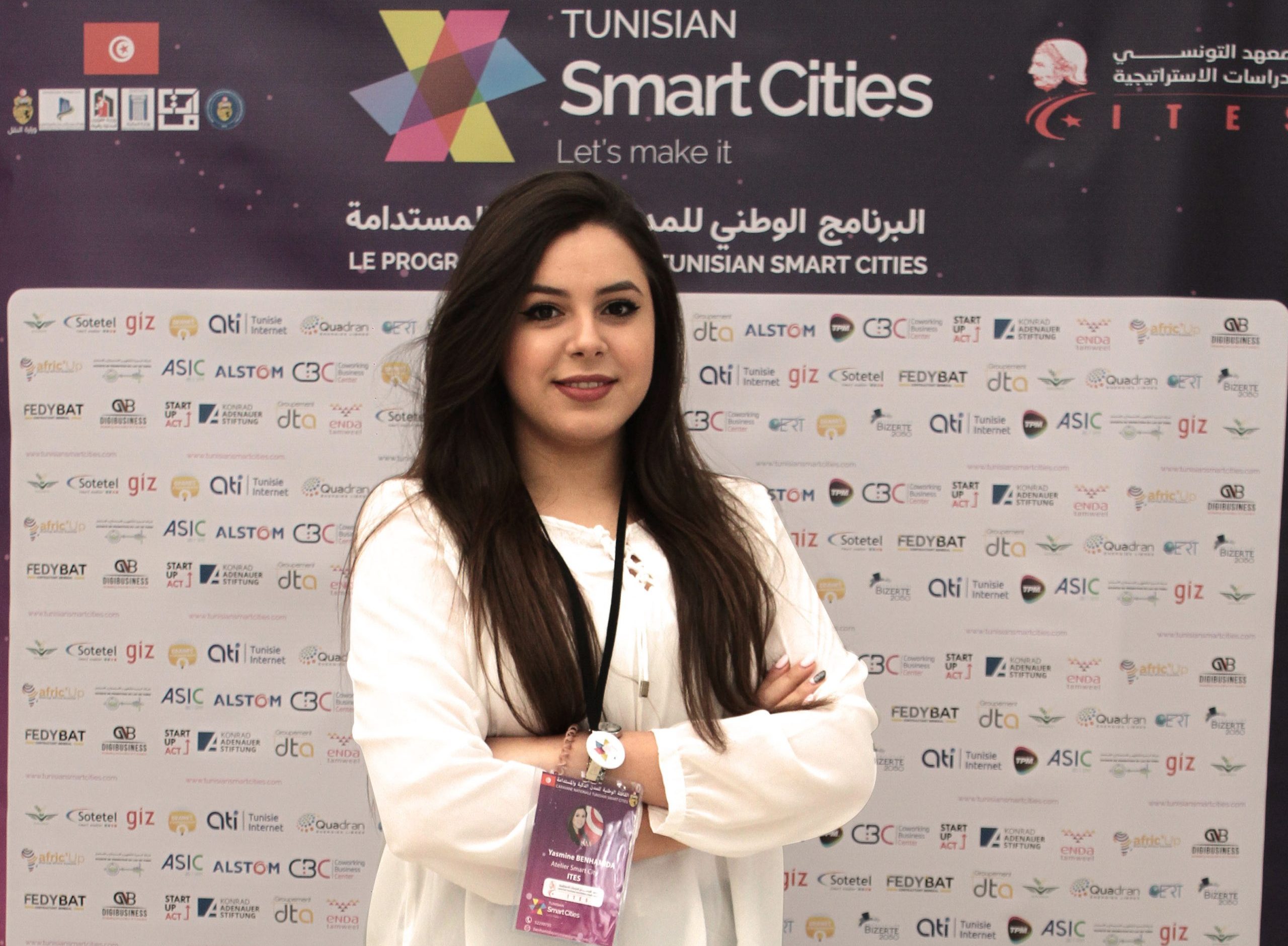 This is the story of Yassmine Ben Hamida, an inspirational young politician who met NIMD at the Tunis School of Politics (TSoP).

Aged 19, Yassmine Ben Hamida is one of the youngest people in Tunisia to be elected to a political position. Shortly after her election as a City Councillor, she decided to join TSoP. She saw it as a way for young politicians to come together in a multiparty setting, and acquire the skills and knowledge that they need to go further in their political careers. What she did not foresee was the impact the School would have on her own aspirations and relationships.

When she was growing up, Yassmine didn’t hear about politics much. It wasn’t a frequent topic of discussion in her family, and it was rarely mentioned in her friend group at school.

It was only after the Jasmine Revolution, when Yassmine was 12, that freedom of expression took hold, and politics became more accessible:

“Suddenly, there was an explosion of political discourse across all levels of society. Overnight, everyone became an expert in political analysis.”

But it wasn’t until a few years later that Yassmine also started to take notice of the new opportunities available to her. Her civil society work opened her eyes to the power of politics. Among many other projects, she was part of a team who organized medical consultations. She saw the concrete impact that the consultations had on the lives of her fellow citizens, who would otherwise have had no access to this kind of service. That’s when she decided to bring services closer to the people through politics.

So, Yassmine embarked on a political campaign at the age of 19. It wasn’t an easy ride for her. She had to juggle campaigning and studying for her university exams. And many people didn’t believe that someone so young could be there on merit. The criticism Yassmine faced only spurred her on: “It was my motivation for passing on a clear and positive message about young people. We are there and we are ready to take up our place in politics.”

A first step into politics

After months of arduous campaigning, Yassmine was elected as a City Councillor. While she had a lot of experience working in civil society, it was her first time working in politics. From her campaigning, one lesson stood out to her: as a young woman in politics, she would have to fight to prove herself in this domain and be accepted by the older generation.

With this in mind, Yassmine decided to take part in the Tunis School of Politics (TSoP), a platform for young politicians, run by our Tunisian partner, the Centre des Études Méditerranéennes et Internationales (CEMI), with support from NIMD and Demo Finland.

At TSoP, Yassmine was excited to meet so many people from different backgrounds and ideologies; young people who, like her, had entered politics for the first time. She took part in a whole series of interactive sessions, including training and group work, focusing on public law and political sciences; economic sciences and social science. In each, she learned a bit more about the political landscape in Tunisia.

She learned about the role of municipalities, which helped her to see her tasks as City Councillor in a new light. She learned the definition and objectives of Tunisia’s decentralization process – a crucial task of shifting power from the national to the local level.

And, through the School’s focus on political communication and leadership, she learned to refine her soft skills and enter negotiations in her political life on a different footing.

But, what she soon also learned is that the School was about much more than political knowledge and skills. It was about democratic culture.

As Ahmed Driss, Director of CEMI, puts it: “Democratic culture goes beyond the traditional understanding of democracy as a political system and the rule of law. Participants also need to understand values such as integrity; how to bring about change through peaceful means; and respecting minorities and people who are different.”

This started, of course, with the multiparty setting. Before taking part in the School, Yassmine did not have contact with people from other political parties. While Yassmine had always believed in human fraternity as a key principle, TSoP helped her to put this into practice with people who held very different beliefs.

As time went by, her relationship with the other participants went beyond mutual respect. She made friends with many participants; learned about their motivations; and forged a long-lasting connection.

Through the School sessions, it was clear that Yassmine was thriving. Based on examination results, CEMI and NIMD selected her as one of 10 high-performing students who would take part in a series of regional exchanges between young politicians in Jordan and Tunisia, including a final exchange visit to the Netherlands.

Yassmine was inspired by the experiences that her peers in Jordan shared. It was refreshing to see things from a different perspective and work together to consider practical ways to help young people into politics and address regional challenges.

She also believes that the exchanges helped her to widen her perspectives. Meeting other young politicians from Jordan opened her up to the possibilities of a more interconnected world, one where she could work directly with other young leaders across her region.

The exchanges also affected her view of her future prospects. She recalls how, during her visit to the Netherlands, she entered into conversation with H.E. Elyes Ghariani, Tunisian Ambassador to the Netherlands. They discussed possible agricultural cooperation between her municipality and the Netherlands.

While she had previously focused solely on working locally, this conversation showed her the more international possibilities and awoke in her a commitment to explore different sectors in her role as City Councillor.

New opportunities for her community

Yassmine is determined to take what she has learned back to her community. For example, she is working on an international architecture and urban planning project entitled “space for citizens”. As part of this project, she is creating a space in her city dedicated to managing citizen affairs such as complaints and registrations. This will increase responsiveness to citizen demands and, ultimately, bring the services of the Municipal Council closer to the people.

In addition, Yassmine wants to make sure that other young people also have access to TSoP. She is working with CEMI to start to involve even younger people from her municipality in the School, including secondary school pupils. These pupils will attend training and even Multiparty Council sessions. They will learn how local politics works, how it affects them, and how to get involved.

“For me,” explains Yassmine, “the idea of cooporating with TSoP to help young people in my city came from my deep belief in the need to create new generations of engaged citizens.”

Unlike Yassmine, these young people will have the chance to grow up in a democratic environment, with real understanding of how they can make their voices heard.

“It’s an opportunity for today’s young people, but also for the future of Tunisia. This is how we make sure democracy is here to stay.”

Yassmine is excited for what the future will bring. For her, TSoP is about expanding horizons. And one of her possible ambitions is to pass from local to national politics, where she can propose national solutions to the challenges her country faces.

Whatever path Yassmine takes, she is pleased to have the continued support of TSoP and the new friends she has made. Her network of alumni cuts across traditional party boundaries. Its members are not only Tunisian, but hail from across the wider region. They share a vision of a more democratic future, and they will be there to help each other towards achieving that future.

As Yassmine puts it: “Perhaps one day, we will be the leaders of our parties, and the connections we have built through TSoP will have a major impact on the decisions we take as leaders”.

Yassmine’s story is one of a series of stories featured in NIMD’s 2019 Annual Report. Download the publication here. (PDF)