NIMD was delighted to host ambassadors, foreign dignitaries, and Dutch diplomats at our Spring Reception on 10 March, an event that provoked reflection on the functioning of effective democracy at a time of global upheaval and uncertainty.

Our guest speaker René Paas, the King’s Commissioner in Groningen, used his keynote address to examine how regions can make their voices heard in national capitals, and why listening to all citizens is crucial for an inclusive democracy to flourish.

The war in Ukraine was on everybody’s minds, and NIMD’s Executive Director Thijs Berman used his opening remarks to stress the importance of promoting democratic values at a time when they are under threat by Russia’s invasion of Ukraine. 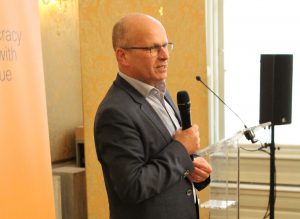 “We can be paralyzed by our own shock and horror seeing the difficulties the Ukrainian people go through, but paralysis is the last thing we need today,” Thijs said, urging the gathered dignitaries to stand up for the values of freedom, democracy and rule of law.

“We have to realize the urgency to support and respect democracy worldwide: where we see a fragile or young democracy, we must invest in democrats; where we see a democracy backsliding, let’s talk with governments. If we want to keep the world peaceful, there is only one way, and that is through agreed solutions within the framework of the rule of law and international obligations.”

Thijs stressed that it was important for governments that want to promote democracy abroad to also look in the mirror and be honest about their own shortcomings – a topic addressed by René Paas, who reflected on his experiences representing one of the Dutch regions further from the capital. 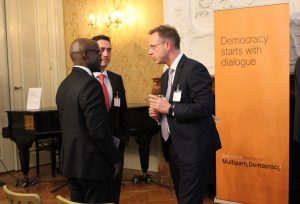 Mr Paas spoke about how resources in The Netherlands are often concentrated in the Ranstad region of Amsterdam, Rotterdam, The Hague and Utrecht, which sees more investment in infrastructure, transport, performing arts and other public services. This is despite the fact that a significant amount of The Netherlands’ GDP is generated from outside that region.

Problems experienced in the other regions are also not given as much attention. Mr Paas used the example of gas extraction in Groningen, which has caused earthquakes and damage to the province. However, after a long battle with central government in The Hague, the people of Groningen are still waiting for compensation. 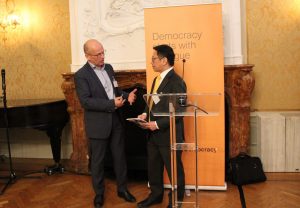 Mr Paas stressed the need for countries big and small to listen to all voices, because crises can only be solved when a whole country comes together.

“People are connected like never before, so why do people in Groningen and people in The Hague seem so distant from each other?” he asked. “Only when we realize that we should use the potential of the whole country can a small country do great things.”

His comments had resonance with many of the assembled diplomats, with representatives from countries as large as Brazil and as small as Malta reflecting on similar national challenges. 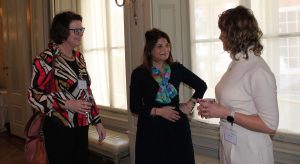 The NIMD Spring Reception also gave people the chance to reconnect after a long period of COVID-19 related social distancing, and we were delighted that representatives from more than 20 foreign embassies in The Netherlands were able to join us. We also welcomed members of NIMD’s Supervisory Council, Advisory Council, NIMD staff members, and representatives from the Dutch Ministry of Foreign Affairs.

During difficult times, keeping the lines of communication, dialogue and diplomacy open is essential, and NIMD is proud to have helped facilitate such connections at this thought-provoking event.