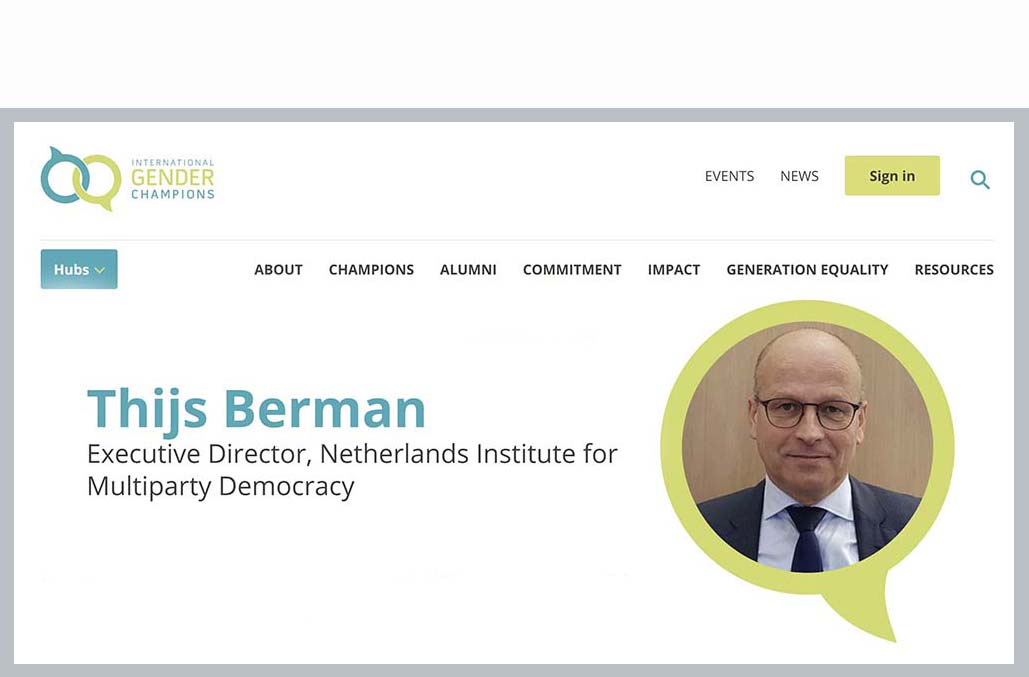 We are delighted to announce that NIMD’s Executive Director, Thijs Berman, has joined the International Gender Champions network, reflecting NIMD’s ongoing commitment to empowering women and supporting their participation in politics around the world.

The IGC is a global leadership network that brings together female and male decision-makers determined to break down gender barriers and make gender equality a working reality in their spheres of influence.

There are currently more than 300 active Gender Champions in the network, and Thijs is delighted to be joining them in their vital mission to work towards greater visibility and participation for women in public life.

“The IGC is a great initiative, bringing together such diverse individuals and making them really examine their commitments to gender equality, both in their programming work and within their own organizations,” says Thijs.

“Democracy cannot thrive unless the voices of all people in society are heard, and women are absolutely central to the functioning of an inclusive democracy.

“NIMD supports and empowers women around the globe so they can play a meaningful role in political leadership, conflict resolution, and peace building.”

As a Gender Champion, Thijs pledges only to participate in panels where both women and men are represented. He also commits to embed gender equality and empowerment in all decision-making and programming processes at NIMD and promote the role of women in peace and dialogue processes. Read his full commitments here.

Gender equality and inclusivity are at the heart of NIMD’s work. We are working towards gender parity in our Democracy Schools, and we include a gender and diversity perspective in the design, monitoring and evaluation of each of our country programmes.

NIMD is also a proud member of the LEAP4Peace Consortium, which supports women in Myanmar, Colombia and Burundi so they can play a meaningful role in political leadership, conflict resolution, and peace building. NIMD is also one of the partners of UN Women’s Peace and Humanitarian Fund Rapid Response Window, supporting women’s participation in peace processes.