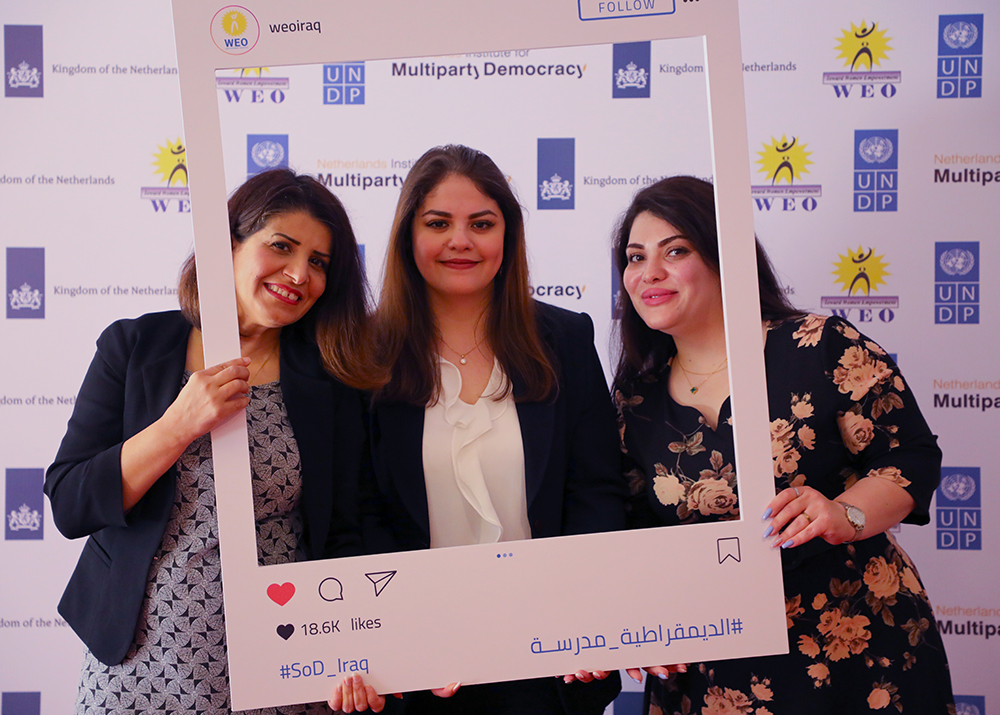 In Spring 2021, NIMD was delighted to launch its first Democracy School in Iraq, bringing together 25 aspiring politicians for six workshops on building democratic knowledge and skills.

This pilot project, implemented by the Women’s Empowerment Organization and funded by the United Nations Development Program and the Dutch Embassy in Iraq was a great success, and NIMD is continuing its work in Iraq with another Democracy School planned this year. 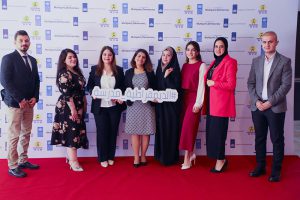 The country faces many challenges, including a fragile security situation, rule of law issues, and economic insecurity. But Iraq’s young people have demonstrated their desire to make a positive change for their country, and NIMD is committed to help them on that path.

Here we catch up with four of the 2021 graduates, who offer their insights into the challenges young people face entering politics in Iraq, and find out how they are applying their new skills. 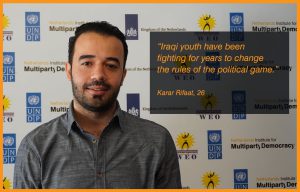 Karar is a Fellow at the American University of Iraq and at the Global Governance for Young Professionals at the Atlantic Council. He attended the Democracy School to expand his network of like-minded activists to help him achieve his goal of promoting the political participation of young people across Iraq.

Karar has been frustrated by the lack of initiatives to encourage young people in politics.

“Iraqi youth have been fighting for years to change the rules of the political game,” he says. “Political actors and adults in power have imposed policies, legislation and decisions that prevent or restrict the political participation of young people, and in the end, after 18 years of the new political system, we have political, social, economic, and legal obstacles.”

These obstacles include the high costs of running for office, and pre-conceptions about the lack of qualifications among young people, he explains. But being able to meet with other young people from different parties helped Karar see that they are all pursuing similar goals.

“Meaningful and constructive political dialogue can create common spaces with the other different political parties and groups, and we can reach common ground on issues of importance to the country,” he says. “Now, months after graduation, this networking has helped me implement many political programs and activities.” 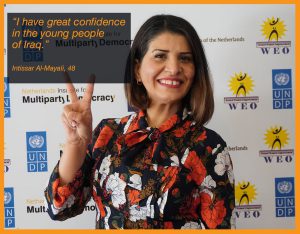 While most of the graduates of the Democracy School were under 35, some more experienced political figures joined the school both to share their knowledge, broaden their own skills and network – and to share in the enthusiasm of the young students.

One of them was Intissar Al-Mayali, a long-time human rights activist and advocate for women’s rights who is passionate about fighting corruption and has been a vocal supporter of reform in Iraq.

As one of the more politically experienced students, Intissar was able to both find inspiration in the energy and passion of the younger students, and pass on her own knowledge to people who were taking their first steps into politics.

Going beyond the old divides

“It has been a wonderful and distinctive experience, rich in young and promising energies,” she says. “Although some of them have no political experience, they have visions that contribute to building democracy and support the political participation of young people.”

Reflecting on the situation in Iraq, she sees hope among the young aspiring politicians she studied with, who see beyond old divides and polarization and look ahead to a more inclusive future.

“My country will not be able to rise unless it begins educating young people to think critically and respect different points of view,” she says. “I have great confidence that young people in Iraq will play a distinguished role in building democracy in its proper form.”

Hussein is a member of the Iraqi Federation for Labour and Rights and has taken part in protests demanding reform. Now he is looking to develop his experience in political life, and he attended the Democracy School to find out more about democratic principles and to extend his sphere of influence.

“My belief about strengthening democracy comes from strengthening it among individuals, and because democracy in Iraq is in its youthful stage, it must be strengthened among young people in order to grow and develop with them,” he says.

He always planned to share the knowledge acquired at the school, and since graduation, he has been putting this plan into practice.

“This was part of the strategy that I drew after participating in the Democracy School: Employ the acquired knowledge and skills in organising workshops and training for as many cadres as I can from our young political organizations, which are in great need of such programs,” he explains. 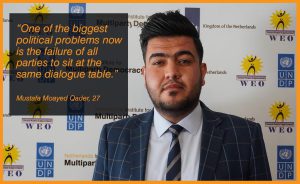 A civil engineer by trade and an employee at the Ministry of Oil, Mustafa is also active in youth politics and is a member of the Economic Empowerment Advisory Team to the Minister of Youth and Sports. He took part in the Democracy Schools to increase his knowledge and cross-party networks.

“The quality of the training workshops and meetings with decision-makers are unique and inspiring and really helped me enrich my information and my relationships,” he says.

He sees both practical and conceptual barriers to the political participation of young people in Iraq, given the country’s recent history of conflict, insecurity, and economic instability.

Optimism in the new generation

“Poverty and the lack of job opportunities led young people to search for any job,” he says, adding that they often do not see politics as a career option. This is exacerbated by “the absence of government programs or efforts by parties in Iraq to educate young people on politics and democracy”.

His time with the 24 other young people at the Democracy School helped him see that they all shared similar goals.

“The most important part of the experience was meeting with young people of different orientations, ideas and political visions at one dialogue table to listen to different perspectives,” he says.

Mustafa is optimistic that these kinds of opportunities will lead to a new generation of politicians more open to dialogue and cooperation: “One of the biggest political problems now is the failure of all parties to sit at the same dialogue table.”