Home > News > Interview: Extremism and the future of democracy
Back to overview

Interview: Extremism and the future of democracy

On 24 November, NIMD, Netherlands Helsinki Committee and The Hague Humanity Hub held our monthly #DemocracyDrinks in The Hague.

For this edition of informal networking, we welcomed special guest Charlotte McDonald-Gibson, journalist and author of the 2022 book Far Out: Encounters With Extremists.

Charlotte kicked off the event with her analysis of the link between democracy and extremism. What threat does extremism pose to democracy? And how can how can dialogue and democracy help us address the underlining causes of radicalization. How can we create space for redemption in today’s polarized societies?

We talked to Charlotte before the event, to find out more about her insights and findings.

Tell us about your inspiration for writing Far Out: Encounters with Extremists?

My first book – Cast Away, published in 2016 – told the stories of refugees who were trying to reach Europe, so on the surface, writing about extremists is very different! But there is a strong thread connecting the books, and that is my attempt to immerse the reader in the mind and the decision-making processes of people who are routinely dehumanized and reduced to one-dimensional figures in the public space. 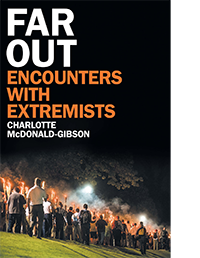 Of course, refugees are most often the victim of dehumanizing rhetoric and hate speech, while extremists are the perpetrators. But if we are working toward the goal of a more tolerant, empathetic society for all, we need to understand why people are drawn to harmful and polarizing narratives, because without truly understanding the causes, we cannot hope to forge the tools to combat extremism.

So in Far Out, I really want to challenge a reader’s pre-conception of who or what an extremist is. We often see this through the prism of our own biases and our own personal politics and ideologies, but in fact we are all susceptible to the kinds of universal feelings and emotions that can make people vulnerable to extremism, and I want people to recognize that it’s not an issue of us and them. It’s not: ‘those people over there who are extremists are bad people, and us over here are the good guys’. It’s a very thin line between us all.

It’s a controversial choice to try and create empathy for people who have followed hateful and polarizing ideologies, and who have caused fear and harm to others. But when we allow ourselves to see parallels with our own experiences and accept that the choices these people have made are rooted in some pretty universal human experiences, we are better able to respond as individuals and as a society to the problems we face.

Your book offers insights into the underlying causes of radicalization and extremism. What did your interviews reveal?

To get past the pre-conceptions we have about who or what an extremist is, I delved into the individual stories of people from across the ideological spectrum, including a young man who became the face of white supremacy in Trump-era America, a Norwegian woman sucked into a left-wing conspiracy in the 1980s, and a schoolboy who left Britain to fight in Syria.

By putting these stories side-by-side, we can see the commonalities in the individual and in the broader societal and political context that transcend ideology. And it was revelatory to see how similar their stories were, regardless of their religion, age, background, or nationality.

One aspect that unites everyone in Far Out is a sense of alienation from the community they felt they were supposed to be a part of. What that community is differs depending on the individual: it can be as simple as feeling alienated from your family, it can be a specific institution or group of people that you feel alienated from: your peers at university, for example. It can be alienation within a culture or religion.  Whatever the specific community is, that feeling of apartness and a lack of belonging comes out very strongly in all the cases.

Injustice is another commonality. People may experience injustice in their own lives, or they may look to world events and see injustice and feel compelled to try and act. This is often coupled with a sense of powerlessness, and when you feel powerless, anything that gives you that sense of power and that feeling that you are in control not only of yourself, but as a part of something big and important, is incredibly seductive. This is what extremism feeds on.

This is also an element we often overlook when looking at the causes of extremism: the underlying motives can be positive. Many people in Far Out had a desire to make a positive difference and have some impact in the world. That can be so overpowering, especially when we are young, it can be easily exploited.

What can our democracies learn from your findings? What tools do we have at our disposal to prevent extremism?

All of the people featured in Far Out lived in democratic countries, but if we look at some of the underlying causes of their extremism – that sense of voicelessness, powerlessness, and alienation – we see that many of them didn’t feel that those systems were working for them. So I think there needs to be some soul-searching about why our supposedly superior democratic systems are leaving so many people feeling alienated and left behind.

For example, growing inequality is a driver of that sense of powerlessness and the feeling that certain communities are being left behind by government. So democratic societies need to keep working hard to make sure they are listening to all their citizens and serving the needs of everybody, to prevent this perception that democracy only works for an elite.

This means engaging in a dialogue with citizens; building an education system that is responsive to the needs of young people; and investing in the social structures to ensure they work for everyone. It means speaking out against hate speech in politics, rather than tacitly endorsing extreme parties by shifting rhetoric to the far right to try and win votes.

But I also think we must not underestimate our power as individuals to have an impact on the people in our lives. This comes out so clearly in Far Out, when we look at why people leave extreme movements. It is often non-confrontational interactions and acts of kindness and empathy which have the power to make people question their narratives.

In every role we have – as friends, neighbours, parents, teachers, colleagues, community members – we play a part in creating the conditions in which extremism thrives or dies.

Register for #DemocracyDrinks in The Hague here.