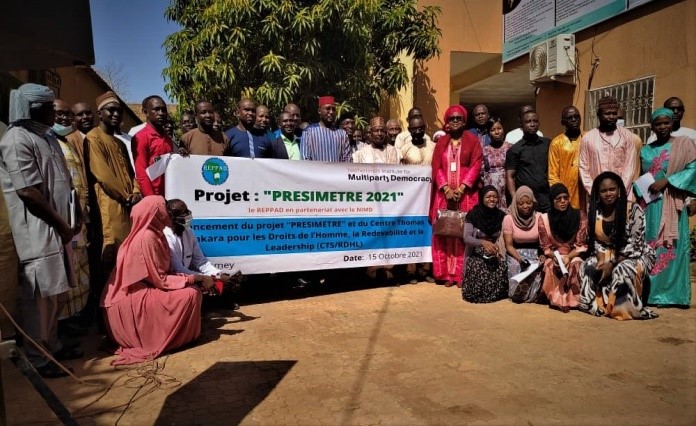 This International Democracy Day, we asked partners and country offices from across the NIMD network to present a snapshot of inclusive democracy in their country. Here, Ibrahima Ba, NIMD Niger Country Director explores how our work is giving communities a say on policies that affect them.

In Niger, like in many countries around the world, ordinary citizens do not always feel heard in politics. In a nation that has only functioned as a multi-party democracy for a decade, people are still adjusting to the new mechanisms for political participation. And, if chances to make your views and opinions heard only come at election time, it’s natural to feel disconnected from the decisions made by political leaders when they are in office.

Added to this, only 3% of people in my country have daily access to internet, making access to information and participation tools more difficult, and effectively accentuating those feelings of disconnect.

Many people feel that, as soon as governments are elected, they forget the promises which won them their voters’ support. These citizens, want and need to participate in the political life of their country.

It is in this context that NIMD has teamed up with youth organization the Pan-African Network for Peace, Democracy and Development (REPPAD) to support the launch of a new project.

The Présimètre project is essentially a system of collecting citizen feedback on the policies of the President of Niger.

Via an online survey, we collect citizens’ opinions on their level of satisfaction regarding public policies, and more particularly the promises made by Niger’s President.

But that’s not all. We are committed to reaching remote areas and people who may otherwise feel excluded from politics. That’s why we are running the project in all eight regions of Niger. And we strive to reach populations who don’t have access to the internet.

To do this, we have Accountability Ambassadors, young people who will carry out face-to-face surveys, and set out the findings in monthly reports.

So the project works on different levels. By collecting views and opinions from across the country, we hope to start to bridge the gap between the population and their political leaders. And we also want to increase the social accountability of these leaders towards the public. Lastly, the process will strengthen the leadership skills and influence of the young and ambitious Accountability Ambassadors.

The next step is to make sure the opinions collected reach the politicians.

As well as presenting the reports of the Présimètre surveys, the Accountability Platform also provides an opportunity for interactive dialogue and exchange between politicians, citizen representatives, civil society and universities. They discuss the implementation of public policies and how these uphold citizens’ rights.

I had the privilege of attending the first Accountability Platform on 29 July, Niger’s National Day of Democracy. It was a unique chance for face-to-face dialogue – a direct and frank discussion on national issues such as education, health, youth employment, security and food.

For me, it was interesting to see the citizens interact with, criticize and praise their politicians. And to hear the politicians respond, justify, explain and give context. A real chance for both sides to feel heard, and finally come together in a new, constructive setting.

Indeed, I think it is exactly the constructive atmosphere of the Accountability Platform that makes it work. For the government politicians, hearing opinions and ideas during a face-to-face meeting is quite new. It contrasted with inflammatory comments from activists on social media, which they had become accustomed to. So the new setting really helped to drive the message home.

After the platform, a technical advisor told us that Présimètre had provided the kind of context, perceptiveness and human insight that is often missing from the technical reports they usually receive. This makes it easier draw interesting and relevant conclusions to report to the President.

I am excited to be embarking on this project with my team and our partners here in Niger. We will focus now on increasing the number of Accountability Ambassadors and rolling out the Accountability Platforms so we can reach as many people as possible.

For me, this is a unique opportunity to see real democracy reaching people who so often feel shut out and discontented.