Finding my feet in politics through the Jordan School of Politics

This Summer, NIMD Jordan held its latest edition of the Jordan School of Politics (JSoP), once again welcoming a cohort of ambitious and politically motivated young people from across the political spectrum. The School offers these participants a chance to build knowledge and skills that will help them to enhance their political participation. It’s about sharing knowledge between aspiring young politicians in the country and helping them to learn from each other’s experiences.

We asked Aya Alnajjar, a participant of this year’s JSoP to reflect on her experience, what she learned and how it has influenced her. 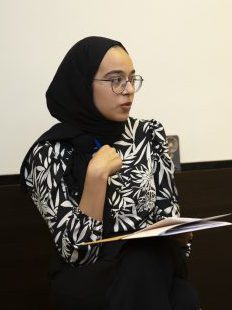 At 19 years old, I may be young but I am already passionate about politics. I feel strongly about the impact it can have on people’s lives, and the power of politics to empower and involve different groups of people.

I am working hard to be able to participate in the politics of my country. As well as my studies, I have also volunteered for five years at Athr Association, a non-profit youth organization that seeks to promote the psychological wellbeing of youth, including through programmes to empower women and youth economically, politically and socially.

Looking back, I think my interest in politics began when I participated in a political debate about lowering the age of candidacy for young people to the age of 25 (a bill which has now been passed). Since then, I have participated in a model German Parliament. It was an outstanding experience, which gave me a lot of knowledge about how parliaments run in general.

However, I still felt I needed more information on reality of the Jordanian Parliament. I needed to understand how things work, in theory and in practice, in my own country.

That’s why I decided to take part in JSoP. One of the things I liked best about the course was that the training was impartial – did not follow any ideological thought or bias. And I got to meet other young people from different backgrounds and political persuasions.

Together, we learned how to engage more in politics in our own country, and we started to understand the internal structures of parties and political institutions in Jordan.

NIMD really gave me what I wanted to learn. I picked up new terminology, read about new theories, and discussed those theories and ideas with other participants. I began to form relationships with participants and our political mentors, where I could ask them my questions and learn from their experiences.

My biggest achievement was finding myself as a politician. I defined and sharpened my political ideas and my thoughts, and began to search for the party that represented me ideologically.

NIMD also provided me with practical support in my budding political career. At the same time as my participation in JSoP, I was also part of a team tasked with writing a policy paper on the presence of women in political parties. It was the first time I had worked on something like this, and NIMD gave me invaluable help, by guiding me on how to write political papers. 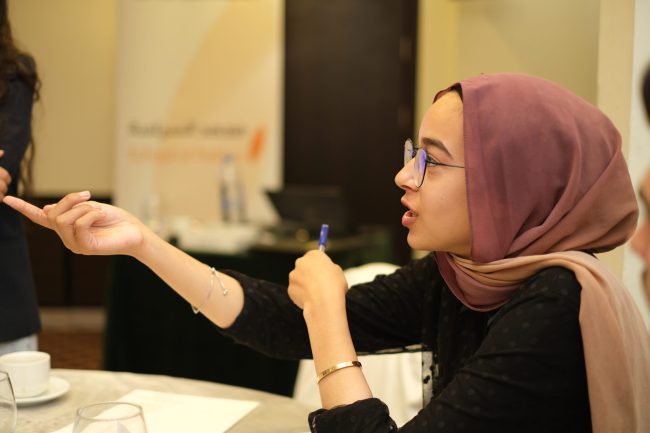 In addition, NIMD gave me the chance to facilitate a focused discussion session on the preparation of the policy paper. The session brought together decision-makers and politicians to discuss the reality of women’s political participation.

“Aya was able to manage the dialogue in a very strong manner and lead the discussion of the most critical points in an organized and neat way.” Ala Mohamed, NIMD Jordan.

It was a very positive experience for me. I had never led a political discussion session before and I was very happy with the support of my colleagues in JSoP. It was the first time that I met all the people present, so it gave me the opportunity to get to know them and build relationships with them. And it was a real confidence boost that their reaction to the session was very good. They praised my desire to learn and my ability to debate at such a young age.

I’m already looking ahead now to my next challenge. I have started to design a political programme within the Athr Association, based on educating peers politically and enhancing the value and importance of effective political participation in our societies.

My task is to develop an existing political programme for youth. We are working to transform this programme into a political school to empower young people politically by connecting them with local decision makers. It’s a kind of mentorship.

I’m excited to embark on this next step, and to give other young people like me in Jordan the chance to really understand and connect with politics.