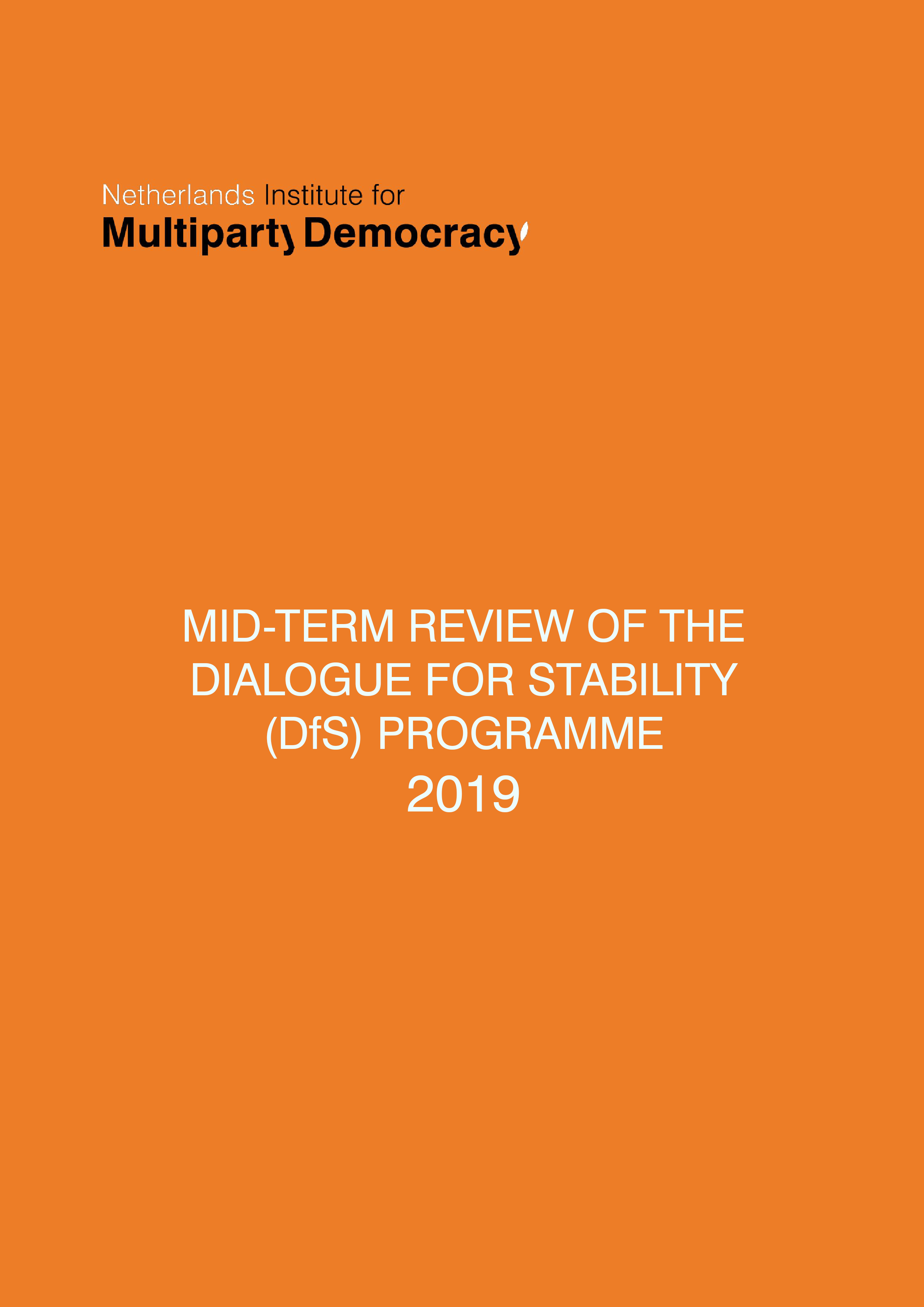 Mid-Term Review (MTR) of the NIMD Dialogue for Stability Programme

NIMD appointed Global Partners Governance in partnership with Alina Rocha Menocal of the Overseas Development Institute (ODI) to conduct a Mid-Term Review (MTR) of the Dialogue for Stability (DfS) programme in March 2018. The main purpose of the MTR is to assess the extent to which the DfS is contributing towards its stated objective of fostering inclusive and legitimate political processes in fragile settings in five focus countries: Burundi, Colombia, Jordan, Tunisia[1] and Ukraine.

The MTR aims to inform NIMD the DfS programme on the following aspects:

The subsequent MTR conclusions can be summarised as follows:

On NIMD’s Theory of Change (ToC)

While NIMD’s theory of change provides the organization with a broad strategy for engaging with political change in different environments, the review points to tensions in the way that the ToC is understood and applied. NIMD should be seeking to use its programme experience more systematically as a way of testing, informing, and refining that central theory. First, NIMD’s central theory is based on a compelling argument about the links between political inclusion and state legitimacy. However, it should be wary of over-claiming causal linkages embedded in the assumptions that anchor the ToC. Second, staff across the organisation do not have the same understanding of what a Theory of Change is for, or how it should be used. Harnessing a more collective and shared understanding can be instrumental to foster cross-institutional learning and feedback loops.

The way DfS works across countries clearly shows that NIMD (and its partners) understands and engages with politics. This ability to think in politically informed ways tends to be instinctive and intuitive. This is in many ways a considerable advantage, as those involved in DfS have innate political skills, rather than seeing and treating PEA as one-off, isolated exercises. However, the way PEA is done differs considerably across the organisation. This combination of an individualised approach that lacks a shared structure across NIMD and its partners makes it difficult to develop a common analytical framework to understand and assess the political context and related challenges.

The programmes are grounded in a thorough understanding of the political context, and the preparation that precedes NIMD’s work in such environments means that the organisation has made considerable efforts to foster local buy-in and get traction for such initiatives to deliver outcomes. Working in particular with young political leaders, especially women, NIMD has established a clear niche in strengthening the quality of political parties and their effect on democratic governance in new and developing democracies. They accomplish this through a comprehensive approach that seeks to foster inclusive and representative political systems, especially through multiparty dialogue, improving the organisational and programmatic capacity of political parties, and strengthening democratic culture and values.

Overall, each of the country programmes is making significant progress in achieving different results in contexts that are varied and throw up different challenges. Some interventions also seem to be more effective than others, and in general our assessment from our research and observations on the ground is that efforts towards i) supporting a more inclusive political party system through dialogue and ii) fostering democratic culture and values are generating greater impact than those intended to iii) support the organisational and programmatic capacity of political parties. In summary:

NIMD’s overarching accomplishment has been to create and preserve a ‘political space’ for dialogue and engagement across political divides. This platform may be one of the few – if not the only one remaining in Burundi – in which political opinions can (at least to some extent) be exchanged and different parties can interact. This space is clearly highly valued by political party members, including the governing party, and since the breakdown of formal interparty talks sponsored by the international community it represents perhaps the sole route by which conflict resolution can take place

NIMD were the only Dutch NGO given a specific role in the Technical Secretariat to help with the implementation of the Peace Agreement that the Government of Colombia signed with the Fuerzas Armadas Revolucionarias de Colombia (FARC) in 2017. This is a remarkable achievement that illustrates the kind of trust and recognition that NIMD has been able to build across the political spectrum, and its work, alongside other organisations, towards creating enabling conditions for peace.

NIMD and DEMO Finland’s partnership on the Tunisia School of Politics and the multi-party dialogue platform has helped to create important and highly valued spaces that bring together actors from across the political spectrum in ways that are much more grounded in mutual respect and growing trust. Many of the young people who have attended the TSoP, especially women, have gone on to work in politics and run for office at different levels

The Ukraine programme have held a number of debates, roundtables and developed policy proposals in its first year, though the most significant accomplishment to date has been the establishment of Democracy Schools in Odessa and Lviv, two areas with higher levels of interparty conflict. Since their launch, the schools have offered high quality political education to participants and have become important platforms for fostering tolerance and diversity.

The application of traditional efficiency indicators to the types of interventions implemented under DfS is notoriously difficult due to the challenges associated with identifying tangible outcomes and assessing plausible contribution. These inherent challenges are further exacerbated by the difficulties faced when implementing politically smart and contextually relevant interventions in FCAS settings. As such, it is difficult to make robust claims about the efficiency of DfS at mid-term. However, the review team are satisfied NIMD is adhering to high standards of financial accountability.

The overview of programme results across the five countries highlights the complexity and variety of settings within which NIMD operate. In such complex political contexts, generating progress requires time and effort – and it is essential to recognise that progress may be related to process as much as, if not more so than, to more tangible outcomes, especially within the timeframes involved. In general, DfS efforts intended towards the party system and democratic culture and values, especially through the multi-party dialogue platforms and the Democracy Schools, have achieved considerably more progress than initiatives aimed at the political actor, namely strengthening the organisational structure and strategic planning capacities of political parties.

[1] The DfS programme in Tunisia is jointly funded and managed by NIMD and DEMO Finland.

The full Executive Summary can be downloaded below. If you would like to view the full Mid-Term Review, these can be requested from Nic van der Jagt, Planning, Monitoring and Evaluation (PM&E) Advisor at NIMD.