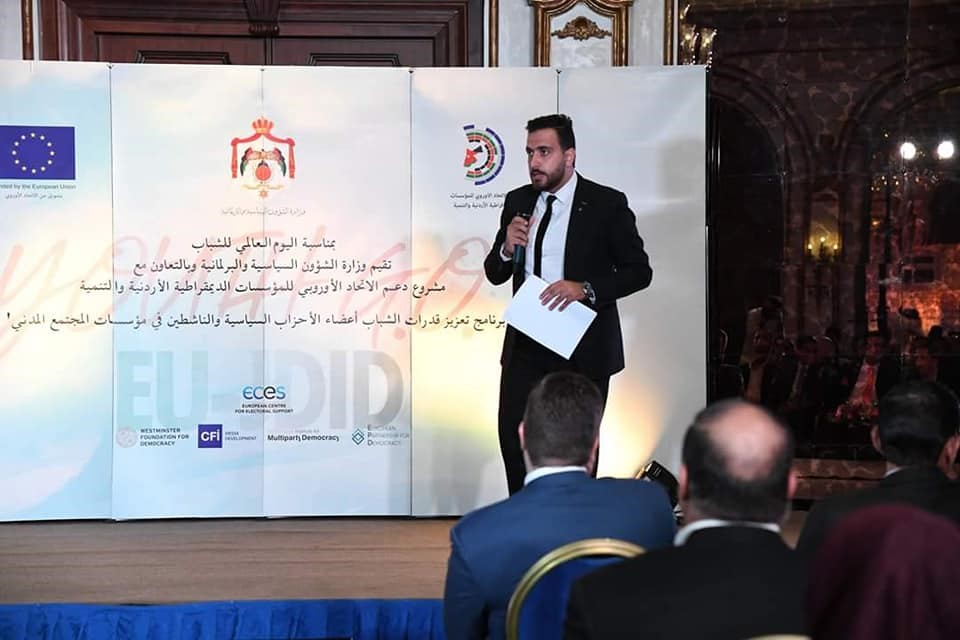 Hamza Hyassat is an activist. He works at the Jordanian Hashemite Fund for Human Development, a non-governmental organization dedicated to promoting rights-based, sustainable human development in Jordan.

He is also a graduate of NIMD’s first Young Political and Civic Actors Trainee programme, which took place from November 2017 to August 2018. He chose to embark on the programme to meet and engage with other young activists and political party members. But he could not have expected the profound effect the training would have on his career and his engagement in local politics.

Developing skills in training and debate

NIMD’s Young Political and Civic Actors Trainee programme – which is part of the EU-funded EU-JDID project – targets young political party members and social activists. The aim is to encourage young people to build a network of politically active peers and participate in their country’s political process.

The programme also places strong focus on the personal development of participants. With increased skills and deepened knowledge, these young people are better equipped to make an impact on Jordanian politics.

Throughout the first training programme in 2018, NIMD’s team was quick to notice Hamza’s potential. Throughout the intense programme, he showed real commitment and enthusiasm. He used every opportunity to learn from the experts and trainers to develop his skills and acquire new political knowledge. In particular, Hamza shone in public speaking and debate, quickly learning how to construct arguments and work with data to strengthen his points.

As part of the personal development aspect of the course, our Jordan team provides participants with different roles and responsibilities to develop their particular strengths. They therefore invited Hamza, as a natural speaker and teacher, to deliver a training session to his peers. Hamza trained his fellow participants with confidence, preparing them for the debate session that took place during the graduation ceremony.

Hamza was given another opportunity to let his confidence shine when the Jordanian Prime Minister and a ministerial team held a meeting with 150 youth representatives from different governorates (administrative regions) in Jordan. The meeting, organized by the Ministry of Youth, aimed to make youth voices heard and address the challenges young people face.

Because of his participation in NIMD’s Youth Training, Hamza was selected to represent his governorate. He was able to use the skills and tools he had picked up during his training to contribute actively to the debate on the economic challenges currently facing Jordan. His arguments were convincing and he skillfully analyzed data to back up his points.

“This training course has taken me to a different level; from exchanging opinions and information to proposing ideas, building arguments and coming up with statements. I have always followed the news, but after the training course I became more engaged and most importantly I feel my voice is being heard.”

Passing on the skills

After the course, Hamza continued to pursue his passion for training and public speaking. He started to carry out training sessions in different governorates across Jordan, both in his personal capacity and in cooperation with the Ministry of Youth. Through his training, Hamza passes on the knowledge and skills he learned from the Youth Training. He covers many topics to help young people become more politically involved, particularly how to engage in debate and dialogue and build a convincing argument. He hopes that, by passing on these skills, he will enable others to advance their own political participation and careers.

“You can count on me for your future programmes for youth as a trainer, not only as a trainee”.

It was not only his new skills that broadened Hamza’s horizons. For him, the opportunity to meet and exchange ideas with young members of political parties was priceless. As he got to know the students, and understand their different viewpoints and ideologies, he started to build a network of young political actors keen to make a difference in their communities.

Seeing the potential to create political change by working together with others, Hamza began a lobbying effort along with peers from his own region. Together, they successfully lobbied to form the Shadow Government for Decentralization in the Balqa Governorate.

This new organ will monitor the actions of the Governorate Council, an elected assembly which aims to enhance development and provide services locally to reduce pressure on the parliament. Governorate Councils are fairly new in Jordan, having been founded by a 2015 Decentralization Law, and first established in the 2017 local elections.

Given how new the Councils are, Hamza saw the need to provide support to the new organ in his Governorate. The main purpose of the Shadow Government for Decentralization is to monitor and oversee the actions of the Balqa Governorate Council. It also proposes new projects, including the establishment of parks, parking spaces and clubs, based on the needs and perspective of the youth.

While still in its early stages, the Shadow Governorate is a good step towards increasing accountability in local structures, as well as increasing the political voice of Jordan’s young people in their local area.

We are proud, at NIMD, to be able to mentor students like Hamza, encouraging and enabling them to create change in the political structures and culture that they see around them. It is clear to us, in every country we work in, that democracy needs strong and committed people to hold it up. By empowering young people to take up that role, we hope to contribute to more openness and inclusiveness in politics for years to come.

The EU-JDID programme is funded by the EU.