NIMD > News > Difficult times for democracy
Back to overview 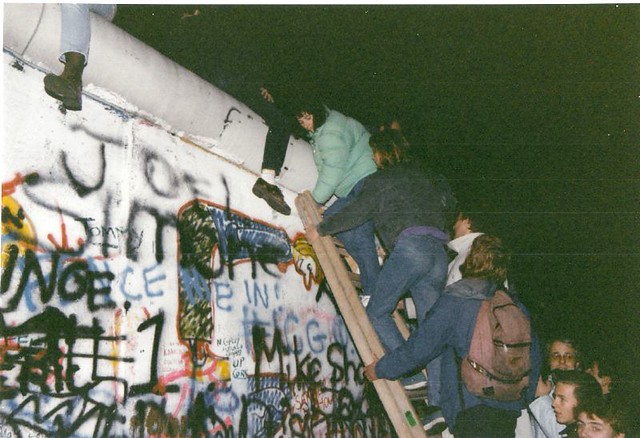 Between 1 and 14 September, NIMD External Advisor Will Derks visited three Democracy Schools (Lviv and Odessa in Ukraine and Gori in Georgia), where he discussed the difficult times democracy is facing, and the innovations that may help us answer these challenges. To commemorate the 30th anniversary of the fall of the Berlin Wall, Will shares with you a few of the modern concepts under debate in democracy, and the ways we may face down current threats to democracy worldwide.

It won’t come as a surprise that, as the former Innovation Advisor of NIMD, I focused on innovative ways to strengthen democracy. As the American philosopher John Dewey put it: the cure for the ailments of democracy is more democracy. During my presentations I tried to show that there is an increasing number of people around the world putting this into action by furthering the deliberation and participation of ordinary citizens in democratic processes. More often than not, these activists come up with surprising, innovative means to increase democratic deliberation and participation.

During my talks I discussed a range of both technological and ‘non-tech’ innovations that people across the globe are presently experimenting with. What caught most attention from the non-tech examples that I mentioned was the idea of ‘liquid democracy’, as well as ‘sortition’ or lot-drawing. Sortition as a means to select people for public office (rather than elections) is actually already very old: it was in use in classical Athens, for instance, or later in some Italian city-states during the Renaissance such as Venice. Now it is revived as it were and felt to be a stunning innovation, which in Ireland and Iceland, for instance, was incorporated in processes to design new constitutions.

Liquid democracy, also known as delegative democracy, is, in fact, a hybrid system that combines characteristics of representative democracy and direct democracy. The idea is that everyone within a voting process (normally about issues rather than about people) can, for a variety of reasons, delegate her or his vote to someone else. This person, who sometimes is a professional politician, sometimes not, may in such a manner accumulate many votes and become a temporary political force to be reckoned with, albeit only for that particular issue. But even though a person has delegated her or his vote, it may be withdrawn at any time before the voting starts. And, of course, one need not delegate one’s vote, but can always vote directly.

As for the technological innovations to strengthen democracy, I first discussed one of the almost archetypical digital platforms for ‘participant-driven proposition development and collective decision-making’ that was especially designed to facilitate liquid democracy. Around 2011 the platform Liquid Feedback came into being and was intensely used by the members of the Pirate Party in Berlin, following an impressive victory in the elections for the Berlin parliament. In the subsequent years until to today, many varieties have followed and I touched upon platforms such as Airesis (Italy), Loomio (New Zealand), DemocracyOS (Argentina), YourPriorities (Iceland) or Consul (Spain) – most of which are ‘open source’ and can be downloaded and used for free.

Both these examples of ‘civic tech’ and those of the non-tech innovations suggest that we are on the threshold of a political movement that will put citizens at the centre. We are developing from a democratic state to a democratic society in which citizens will become co-creators of the world, not just voters. This is what the late Benjamin Barber called ‘strong democracy’, a system in which citizens govern themselves to the greatest extent possible.

Will’s talks in Georgia were featured on Georgia’s national news, and you can view their story in the below video (in Georgian).