Home > News > Colombia: Democracy to the test
Back to overview 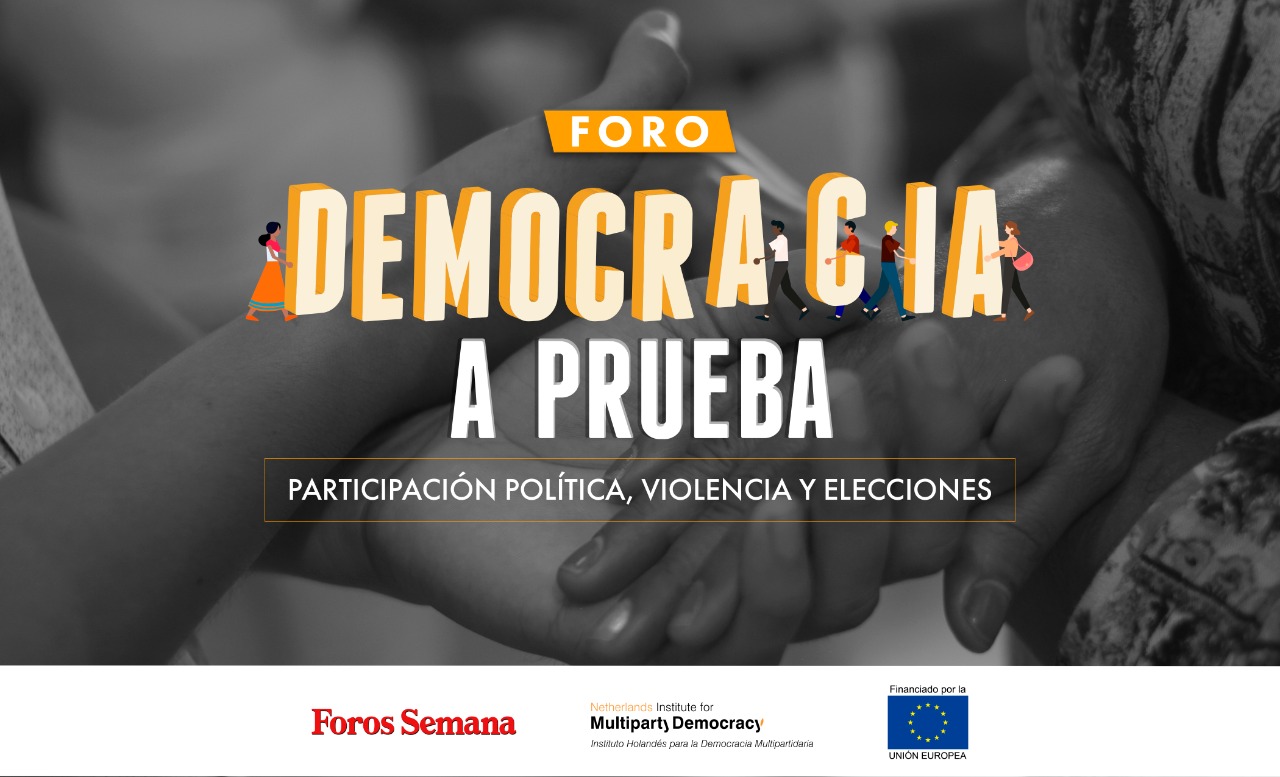 Colombia: Democracy to the test

On 16 October, NIMD Colombia will team up with major Colombian magazine and news outlet, Foros Semana, to hold a public forum. The forum will discuss the topic: ‘Democracy to the test: Political participation, violence and elections’ and will mark the end of our Democratic Action for Peace programme in Colombia.

In the run-up to the event, Semana magazine asked NIMD’s Executive Director for Colombia about the effect of political violence on the country’s democracy. Read the full article in Spanish on the Foros Semana website here.

Foros Semana magazine and NIMD will hold a public forum on the theme: ‘Democracy to the test: Political participation, violence and elections’. Ángela Rodríguez, Executive Director of the organization’s Colombia office, spoke to Semana magazine about political violence during the campaign and the challenges involved in making sure all citizens have a voice in Colombia’s political system.

Foros Semana: Why has political violence intensified in Colombia over the past year?

Ángela Rodríguez: There are many reasons. We cannot attribute the rise in violence to one sole factor. But part of it is definitely the historical lack of State influence in Colombia’s regions. With the growth of the FARC in some territories, a power vacuum was created. This boosted armed groups operating outside of the law. Faced with the absence of state control, they got involved in illegal business and created geographical areas of micro-power.

Ángela Rodríguez: We see lots of outstanding issues when it comes to the implementation of the Peace Agreement, particularly in terms of political participation. The PDET is known by Colombians as the best shot at local participation. They recognize that the plan was relevant for bringing development to their communities.

The question that citizens are left with is: “Now what?”. The concerns and viewpoints of the local population have been heard, but these people are now facing rising violence. And they are still waiting to see their political participation translate into something concrete.

It’s no coincidence that violence has risen in the PDET territories. These territories were chosen precisely because there is a lack of formal power there. In the past, this led to higher levels of violence. And that’s also what’s happening now, because we must not forget the history of controlling legality to permit illegality. That’s why violence in these territories is being carried out against political candidates and the political sphere in general.

Foros Semana: Why has the State’s response been insufficient, and what are your recommendations?

Ángela Rodríguez: Relying solely on the National Protection Unit (UNP) is not enough. The UNP is a technical body and violence in the territories responds to technical factors. If this technical context were more embedded in the context, if we were to go further than a panic button or a safety vest, and tried to really understand local realities, we could do much more to prevent violence.

As well as State institutions, who are responsible for the safety of citizens, the call also goes out to political parties. Nowadays, they don’t know who they are endorsing, especially on a territorial level. When a party accepts a candidacy from a citizen and gives that person publicity, they are putting them in the public sphere. In many cases, the candidate needs protection because there is no safety in numbers. We ask political parties to share responsibility for this. Parties should develop a partner system, as required by the law, that means they: maintain contact with their representatives in the territories; have a protocol for when risks are present; and have a person responsible for managing the institutional response to threats.

Foros Semana: President Duque has repeatedly said that political violence in Colombia is a result of a rise in coca cultivation. What do you think?

Ángela Rodríguez: It’s undeniably a contributing factor. There are illegal groups pushing to continue coca trade. And, on the other hand, there are citizens who believe in the implementation of the Peace Agreement and putting an end to the cultivation of coca. And those are the people who are under threat. But it’s not limited to coca growing. We also see many local leaders who are striving towards restitution, recognition of victims and human rights. And they are also facing threats.

Foros Semana: Representation of some communities was not possible, partly because the Special Temporary Peace Constituencies were not created despite being envisioned in the Peace Agreement. What’s your view on this?

Ángela Rodríguez:  It’s regrettable that the Special Temporary Peace Constituencies [special courts in areas affected by conflict, which would have special rules for the registration and election of candidates for the House of Representatives] were not created. In the political participation section of the Peace Agreement, there were three main categories of change envisioned. The first had to do with the status of the opposition. This was achieved and is in force but we don’t know how it will work in this month’s elections. The second was political reform, which has not been approved by Congress. And the third was to do with the Peace Constituencies. This change aimed to give a voice to people who had traditionally been marginalized from the political system. Unfortunately, the changes have to be approved by Congress in the end. Political parties should recognize the scope of their mandate to represent society. What they did was shut the door to these communities based on what some might consider a power game or a petty tiff among the traditional political parties. In the end, what happened is that the people in these communities have no representative.

Foros Semana: In the electoral Campaign, the Registry said that violence is also a result of stigmatization, which is intensified through social media. What’s your opinion?

Ángela Rodríguez:  It’s important to understand that, just like peace, violence is also built every day. Threats often come directly from citizens through social media. The polarization which can be seen on social media, which is based on stigmatizing certain candidates and certain political beliefs, is overwhelming. Both politicians and citizens should be aware that words have consequences.

Foros Semana: Across the world, liberal democracy is in crisis. How does NIMD manage to support democracy in a country in which it is getting stronger, despite worldwide doubts about this political model?

Ángela Rodríguez:  We rely on people recognizing the value of democracy. It’s surprising how easily we, as Colombians, forget how hard it has been to build our political system. Of course, that system has its flaws – it doesn’t cover everyone who should be represented, and it has many challenges when it comes to elections. But it has been functional in a republican era.

Democracy is in crisis across the world because people do not feel represented and they don’t see democracy solving their problems. We want to shout out for democracy. We want to tell people that democracy can be much more effective if there is more citizen participation. We have to hold the politicians we elect to account. We have to make sure they really represent us, and punish them if not.

Foros Semana: Education is very important in this process. How do you approach this?

Ángela Rodríguez: NIMD’s Democracy Schools aim to provide technical tools to leaders from all levels and strengthen democratic values. Participants are not necessarily electoral candidates, but people who want to make an impact in their communities. They are members of all political parties. We want people to understand how the political system functions from a technical point of view. And that’s not easy.

What we really emphasize are political values such as dialogue, transparency and accountability. We hope that by supporting environments where these values can be exchanges, we will help people regain trust in democracy.