Home > News > A Battle for Change in Ukraine
Back to overview 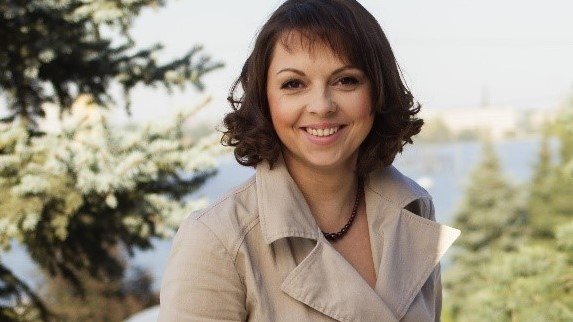 A Battle for Change in Ukraine

Kateryna Chyzhyk is a lawyer and activist from the city of Dnipro in Eastern Ukraine. Situated not far from the separatist capital of the Donetsk People’s Republic, Dnipro city turned into a fully-fledged warzone during the Russian military intervention, denoted by the symbol of Ukrainian unity and independence – “Heart of Ukraine”.

Out of the dangers of war, Kateryna went from humanitarian volunteer, to search and rescue leader, to inspiring advocate for women’s equality. This is her story.

A sense of public duty

Coming from a family of military veterans, Kateryna was actively involved in numerous voluntary and humanitarian initiatives from a young age, supporting veterans, victims’ families and young activists during Euromaidan. Together with other volunteers, Kateryna created a number of local initiatives such as “Victims need our help”, which sought to help coordinate aid for wounded and injured protesters during the Euromaidan clashes.

Kateryna also participated in the formation of a coalition of public organizations and political parties called the “Headquarters of National Protection of the Dnipropetrovsk Region” (HNPDR). The coalition aimed at reinforcing the border area at the borders of the Dnepropetrovsk region by strengthening existing checkpoints and establishing new ones.

In 2015, Kateryna began helping individual units and families of victims in the Anti-Terrorist Operation (ATO) zone. She led the formation of the first search centre for killed and wounded soldiers following brutal clashes with Russian military units in Ilovaysk.

After this, the HNPDR coalition sought to support those facing hardship in the aftermath of Russia’s annexation of Crimea. Through that coalition, Kateryna was actively involved in providing humanitarian aid to internally displaced families from Crimea and assisting with their resettlement.

EECMD Democracy School as a platform for change

It was during the Russo-Ukrainian war, while providing legal help to activists, families of war victims and veterans, that Kateryna found her political motivation. She decided to pursue her postgraduate degree and soon received her second master’s degree in Law.

Then in 2019, she was invited together with other volunteers and ATO veterans to an introductory meeting on a “Democracy School” hosted by the NIMD’s partner, the Eastern European Centre for Democracy (EECMD), in Dnipro. At that time, EECMD was in the process of deciding where to open its latest Democracy School, with the top choices being Dnipro or Karkiv. So, the meeting with representatives of local civil society was to help to decide between the two cities.

“I felt that this was the decisive moment to convince the organization to open the Democracy School in Dnipro, as the city and local community desperately needed educational programmes like this. Thus, we did our best to present our arguments and prove to EECMD that Dnipro was the right place for their next Democracy School. I was extremely interested and motivated to become part of this group and continue my studies” – says Kateryna. EECMD duly decided that Dnipro would be the best place to establish their next Democracy School.

Stepping into the political world

Kateryna sees joining the Democracy School in Dnipro as the catalyst for her future career and professional development. Ahead of graduating from the Democracy School, she told us: “EECMD’s Democracy School provides an opportunity to explore the new horizons and possibilities, to come up with novel ideas for different projects, and to meet new people and establish partnership.

“If before participating in the program I was hesitant whether to go to politics and make a change, the Democracy School experience has changed that. It has made me understand the importance of being able to influence events not only as a public figure, but also as a politician.

“I realized that as a responsible citizen you have to take things under control and try to make a difference – in both my native city Dnipro and in Ukraine as a whole. Hence, I made a decision to participate in the upcoming Local 2020 Elections in Ukraine”.

Since graduating from Dnipro Democracy School in early 2020, Kateryna has been working on issues of gender equality and women’s active participation in Ukrainian political life. Together with her colleagues, Kateryna launched a new platform that would bring together groups of women of different backgrounds and industries, assisting them through training and workshops on issues like campaign management, political financing etc. The meetings served as an additional platform to introduce their policy initiatives to local civil society and political parties, strengthening their candidacies for the upcoming local elections in Ukraine, which are scheduled for October 2020.

Joining the Battle Against the Pandemic

2020 started with significant uncertainty around the world, with the COVID-19 pandemic outbreak threatening health and economic sustainability nationally and internationally. Kateryna joined forces with her fellow Democracy School students and local volunteer organizations to create a support group. This group sought to provide families of war victims and veterans with humanitarian aid, so as to minimize the spread of the coronavirus and the adverse impacts of mass quarantine in Ukraine.

The newly formed initiative soon established a support centre for elderly people who lost their family members in military actions in Eastern Ukraine. Through the centre, Dnipro Democracy School students and their networks have managed to distribute hygiene and food products to more than 500 socially vulnerable families. Due to the major shortage of medical masks in Ukraine, activists also started to sew homemade masks and distribute them for free.

“The rapid escalation of COVID-19 and unprecedented crisis put all citizens worldwide in a vulnerable situation. That is why, it is crucial to take care of our communities and especially of those, who belong to the risk groups” Kateryna tells us.

Dnipro Democracy School students have also been actively involved in awareness raising initiatives. The alumni have been helping with activities such as distributing information on threats and consequences of the pandemic, and introducing material on the health and safety measures being implemented across the country.

Kateryna is determined to continue her endeavors and make a significant change for her region and the society. After the lockdown she plans to start campaigning together with other female leaders and prepare for the local elections in autumn 2020. “I am a team player. I need to be sure that my female colleagues are prepared and ready to run for the office. Thus, my aim is to consolidate potential political leaders of our region and support their political aspirations for the upcoming elections.”- says Kateryna.

EECMD is proud to see its graduates rising to the occasion and providing substantial support to people in need, particularly in challenging times like this. Through its Democracy Schools across Ukraine, EECMD will continue to inspire and empower more female leaders like Kateryna, working restlessly for better future of their communities.