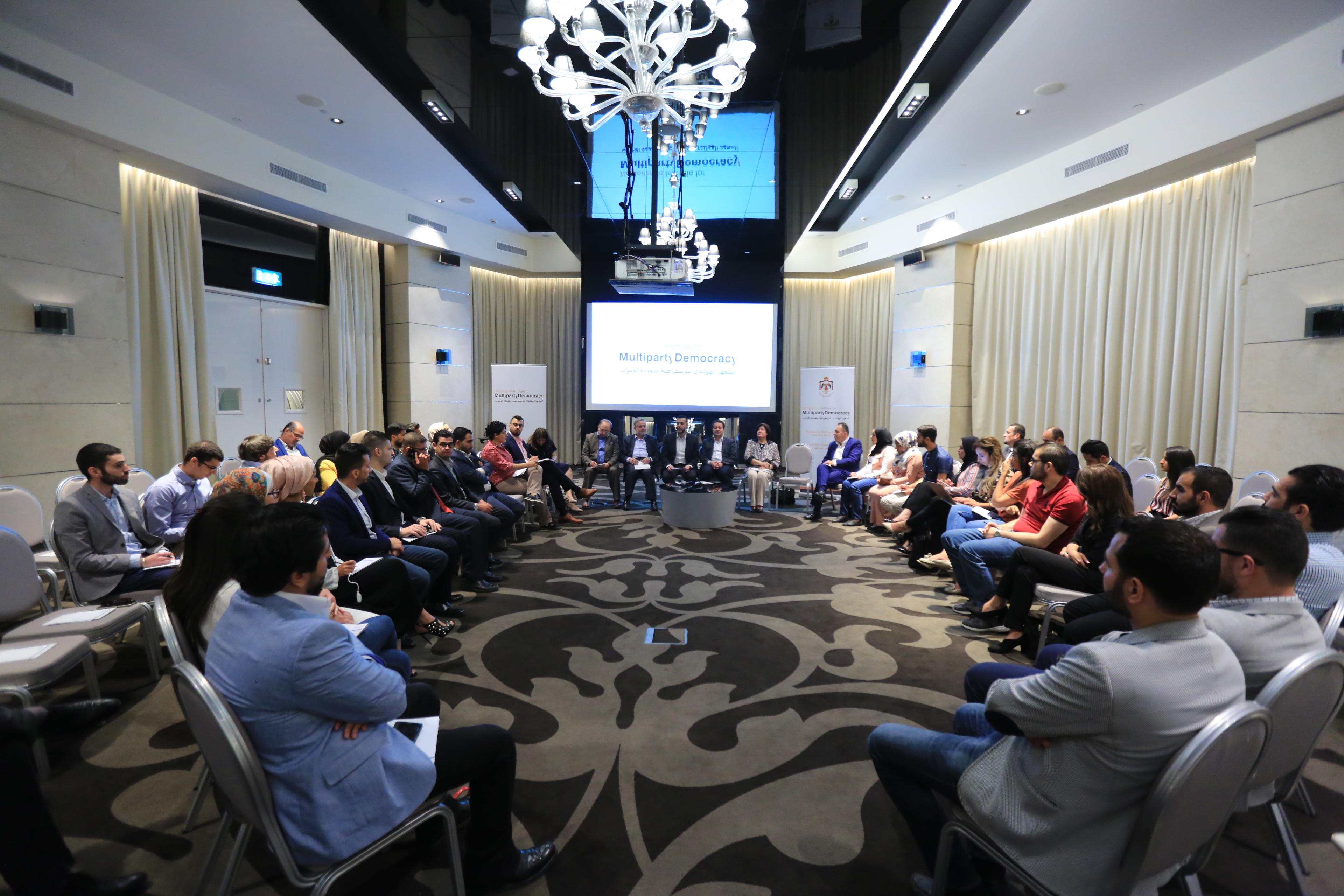 The Jordan School of Politics (JSoP) last week hosted its very first political dinner in Amman. Welcoming politically active youth representing different Jordanian political parties, governorates councils, and youth groups, JSoP asked attendees “is there a future for political parties in Jordan?”. The dinner was hosted by NIMD in cooperation with the Ministry of Parliamentary and Political Affairs (MOPPA).

Greeting participants from across the spectrum, this was the first meeting of JSoP. Through JSoP, NIMD will facilitate constructive dialogue and critical thinking among the participating young politicians. The agenda ranges from political dialogue meetings, where experts and politicians will be invited to discuss relevant political issues with the participants, as well as exchange visits to both Arab and European countries.

The School of politics will also focus on women’s participation in political life in Jordan, as a key value in all NIMD Jordan’s activities.

So, is there a future for political parties in Jordan?

The JSoP students sought to tackle the tough question alongside four experts in the field. The four-person panel had a wealth of experience working with young people in politics, and had an inspiring message for the JSoP students. The first, H.E Dr. Mohammad Abu Rumman, Minister of Youth and Minister of Culture, spoke of how the ministry of youth is responsible for giving a platform to young people. While there is momentum for democratic change in Jordan, Dr. Abu Rumman acknowledged youth participation was essential, saying that “there is a need to ensure youth can overcome the barriers excluding them from advanced leadership positions”.

Attendees then heard from Mrs. Abla Abu Elbeh, the secretary general of the People’s Democratic Party. She stressed the importance of political parties and organized political groups during the Jordanian National Movement which began almost 100 years ago. The third speaker, Eng. Wael Alsaqqa, member of the executive office of the Islamic Action Front Party took a similar historical tone, saying young people had left a lasting impact throughout Islamic history, and that unity between different political parties would help them to do so again. Mr. Sa’ed Karajeh, founding member of the Civil Alliance Party spoke of his own experience as a founding member of his party, and spoke to participants about how his party is using youth voices to turn political ideas into tangible policies.

Those attending in Amman agreed that they face severe challenges when it comes to political activism, including traditional views that led some actors to take them less seriously because of their age – even once elected. Inevitably there were more questions than time could allow for, and discussions were continued over an Iftar meal.

JSoP is made possible through a memorandum of understanding with Jordan’s Ministry of Political and Parliamentary Affairs (MOPPA). Click here to read more about our cooperation with MOPPA.