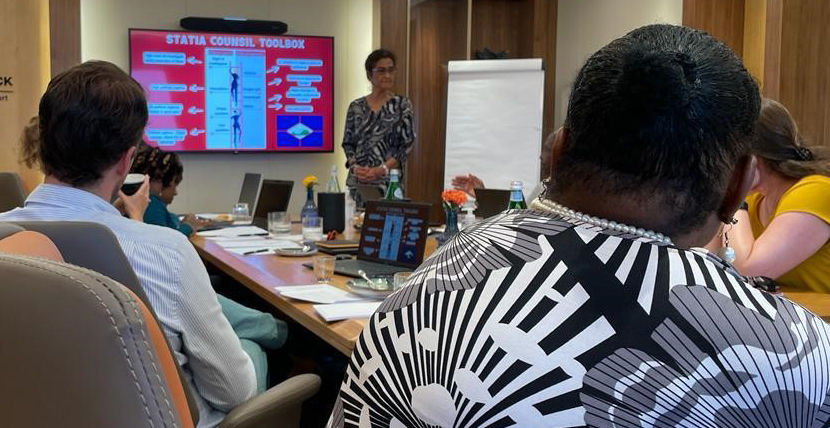 Earlier this year, NIMD facilitated pilot induction sessions for the Island Council of Sint Eustatius (also known as Statia) in the Dutch Caribbean. The pilot was attended by the current Island Council members and by the island’s new and upcoming young political leaders.

NIMD Supervisory Council member and former Dutch MP Kathleen Ferrier was part of the NIMD team. Here, she reflects on the pilot and seeing NIMD’s vision and approach in practice.

I have been involved with the work of NIMD since my time as a member of Dutch Parliament for the Christian Democratic Party. I will never forget the interesting projects I was able to take part in, in countries like Ghana, Kenya, Guatemala, El Salvador and, more recently, Myanmar.

My most recent trip, however, and now as a member of the Board of NIMD, filled me with a very special feeling of pride in NIMD. I refer to a pilot project in Sint Eustatius, a Dutch municipality in the Caribbean.

A package for the Island Council

The Statia Island Council functions at the municipal level within the Kingdom of the Netherlands. The Council has been back in office since 2019, after the Dutch national government dissolved it in 2018. It currently operates with limited rights, but is in a process with the Dutch government of restoring all its rights and duties as Island Council, including budget rights.

To support the Council during this process, we worked with the Council Members to design a training package, which will be used for newly elected Members after every election cycle, ensuring a long-term impact.

I was part of the pilot training, together with Lies van Aelst, experienced Provincial Representative in the Dutch province of Zuid-Holland, Jeroen van Gool, Director of the Association of Aldermen and two NIMD staff members, Violet Benneker and Emiel Bijlmakers.

Working with inclusiveness, trust and flexibility

The result of our work with the Council is a package of tools for the Council members to structure equal relations between local and national government; and promote a culture of dualism based on a code of conduct and rules of procedure, amongst others.

The topics were chosen in extensive conversations with the current experienced Council members of Statia.

And that is exactly one of the reasons for my pride in NIMD.

During the whole week we were on the island, it became obvious that the way NIMD works is thoroughly inclusive and service oriented. All participating (future) Council members could see that their wishes and their needs were central and leading in the work of NIMD.

Not only were the topics for this pilot training determined in close conversation with the participants, it was also decided that Lies, Jeroen and I myself would be available every afternoon for the participants to have (bi-lateral) face-to-face meetings in which all questions and uncertainties could be tabled.

This created a sense of trust between NIMD and the participants and it became clear how important that mutual trust is, when it comes to achieving goals. Trust is at the heart of the kind of open conversations that achieve results, where all ideas are voiced and participants feel included. During our time in Statia, we saw trust growing, and the training culminated in a very inspiring and funny role play that we all enjoyed very much.

Another reason for my pride in NIMD is the flexibility and political sensitivity the organization proved to have. As you will all understand, conducting training in a part of the Kingdom of the Netherlands comes with significant sensitivities. But NIMD’s transparent and respectful approach, and openness to discussing all the sensitivities was beneficial for the project. Thanks to this pilot, we were able to exchange experiences not only with a group of experienced and agile Council members in Statia, but also with a new and very promising generation of future Council members.

The third reason for my pride in NIMD is the vision the organization has. Many would say: why all this energy for an island with only 3000 inhabitants?

NIMD knows and proves that it is not quantity but quality that makes the difference.

I am sure that this successful pilot, in itself, will have a positive and lasting result for Statia. And NIMD is now in conversation with the St. Eustatius Island Council, the island’s Government Commissioners and the Dutch Ministry of the Interior to identify opportunities for a longer-term project on the island. So I hope that the experience and insights NIMD has already been able to obtain will continue to benefit the island.

To me, the experience serves to highlight the effectiveness of NIMD’s vision on the importance of inclusiveness, trust and flexibility. It’s something which NIMD must hold onto, and continue to place at the heart of its work across all its programme countries.