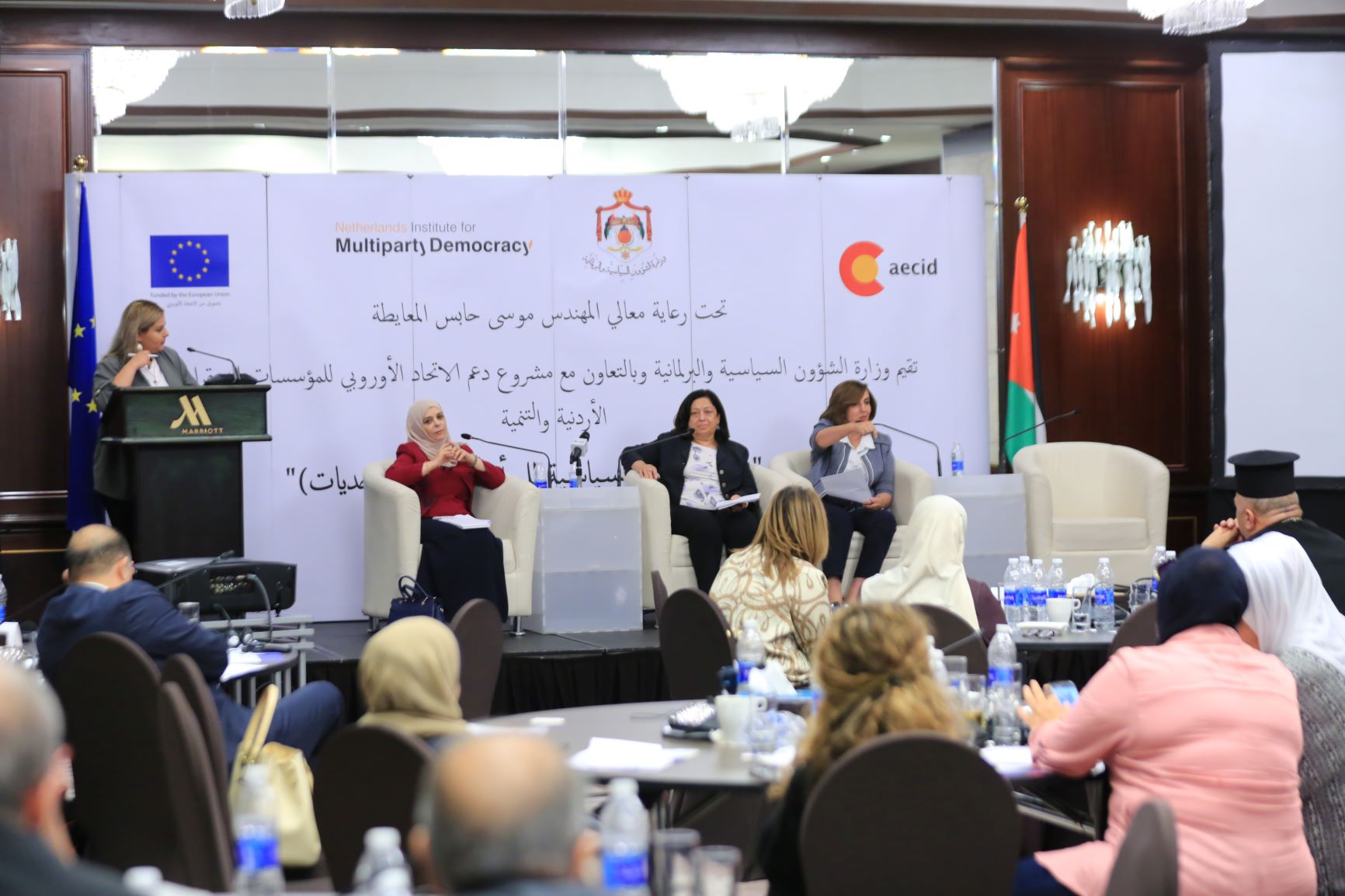 The reality of women’s political participation in Jordan

Despite the fact that Jordanian women have emerged as leaders and visionaries – not only at all levels of government, but also in business, media, and civil society – there is still a lot to be done to achieve actual gender equality in Jordan. This week we hosted the EU-JDID National Conference in partnership with the Ministry of Political and Parliamentary Affairs, where men and women from across political society have joined international experts to discuss opportunities for the better inclusion of women in Jordan’s political life. The one-day conference was followed by a 2-day training session focusing on women’s role and inclusion in political parties.

This is how both national and international actors can support Jordanian women towards equality and to becoming better communicators with the public. Rami Adwan, NIMD’s Country Representative in Jordan, opened the conference by saying: “To support the right of political participation as a basic human right that leads to stability and prosperity, NIMD has been achieving its vision through supporting political parties who are actively participating in political life without discrimination on the basis of gender or belief, and with impartiality that respects local context.”

The conference took place in Amman, Jordan, held under the patronage of The Minister of Political and Parliamentary Affairs, Eng. Musa Maaytah, with the participation of the Minister of State for Media Affairs, Government Spokesperson, and Chairwoman of the Ministerial Committee for Women’s Empowerment, Ms. Jumana Ghunaimat.

In his opening speech, Mr. Maaytah stressed the importance of joint cooperation to win support on issues pertaining to women and raise awareness in the most marginalized areas, and the dire need to make greater efforts in reaching those groups. He also said we must continue focusing on those that are not convinced of the role of women in the Jordanian society until we reach the real empowerment of Jordanian women and enhance their participation in political and public life.

In her keynote speech, Ms. Ghunaimat stressed that the government recognizes the challenges that stand in the way of promoting women’s economic and political empowerment, saying “creating the appropriate environment for the empowerment of women requires participatory work and networking with the legislature and civil society institutions. The Ministerial Committee for Women’s Empowerment is developing a national strategy for Jordanian women, which will contribute to enhancing the status of women and their economic empowerment.”

Jordanian women’s participation in political parties dates back to 1950s. However, political activism came to a halt in the period between 1957 and 1992. In 1992, the new Political Parties Law granted women the right to participate in political parties. Since then, women have become founding and active members of political parties, but their participation remained largely cosmetic and symbolic. Women have not sought to join parties, and parties have not done enough to recruit women. As a result, women are still largely unrepresented in senior positions of many parties. In addition, women’s issues are still neglected in their policy platforms, and the number of women involved in these parties remains low.

There are a number of challenges that hinder women’s participation in public life in Jordan, such as social restrictions resulting from the traditional structure of Jordanian society, which rejects the notion of equality between men and women. In a male-dominated patriarchal system, women are expected to devote their time and efforts towards their families and households. In addition, not only are women excluded from politics, but they are also very often denied their right to an equal social status, education and income, which in turn affects women’s political participation.

The decreasing participation of women in economic affairs creates a dependence on men, who as a resultant control economic resources. This lack of independence restricts women from making their own decisions with regard to their roles in the society and politics. There is also the consideration of constitutional and legal frameworks in a country, which can either help or hinder women’s participation in politics.

Just under 120 people came to the conference, representing men and women from all corners of Jordan’s political culture. Following introductory speeches by NIMD’s Country Representative in Jordan, Rami Adwan, Dutch gender expert Petra Stienen, and ministers from Jordan’s government, the academic programme for the day began. Experts from NGOs, universities, and other institutions came to address subjects such as women and the media, how legislation impacts participation, and their predictions for future developments in gender equality in politics.

As well as the barriers to women I mentioned above, there are also the differences between urban and rural lifestyles that make it easier or harder for women to participate. After she sat on the first panel, titled ‘The Reality of Women’s Participation in the Three Powers and the Civil Society’, I spoke to Dr. Iman Al-Hussein, Associate Professor at Al-Balqa Applied University. She told me that it is crucial to get out of the capital and head to women in suburbs who are thirsty for learning, change and reform, saying “these women do not find good opportunities. It is important for women as well to build coalitions with men in order to advocate for their messages and increase their participation.”

With the opening conference concluded, there were then two days of specialized training for attendees, all focused on how the political environment can encourage the participation and empowerment of women. The participants were highly engaged in the training session and were involved in several activities on campaign training, messaging and sharing professional stories and relevant experiences.

The EU-JDID National Conference, titled The Reality of Women’s Political Participation: Opportunities and Challenges, provided almost 100 female MPs and party members with expert advice and training in areas such as political communication, enhancing gender equality, and campaigning methods. You can stay up to date on what happens and what else our programme is doing for women’s empowerment in Jordan by following NIMD and  EU-JDID on twitter.