With the campaign cycle in full swing and parties canvassing up and down the country, NIMD are supporting our partner in Mozambique, IMD Mozambique, who are part of the consortium behind Sala da Paz (The Peace Room).

Today Mozambican voters head to the polls as the country holds its sixth general election and third provincial election. The ballot is particularly important for several reasons –a new electoral system for Provincial Governors is being deployed, and the vote will serve as a first test for the Peace and National Reconciliation Agreement struck between the ruling FRELIMO party and opposition RENAMO party in August.

RENAMO also has a new leader in the form of Ossufo Momade, who took charge after the death of Afonso Dhlakama, who passed away in June 2019. Dhlakama had contested every presidential election since 1994 as leader of RENAMO, which means his successor has a serious task ahead of them.

Previous elections in Mozambique have led to scenes of violence and voter intimidation, which were widely denounced by the public and civil society. Through the collaborative efforts of various civil society groups – including religious and community leaders, local media, and political organizations –  a platform was set up to mediate any disputes during electoral cycles. The platform sought to contribute to peaceful elections through the speedy and orderly management of any disputes.

In the municipal elections of 2018, Sala da Paz was operating through live observers across the country, who could send information to delegates in real time. The inclusive approach it took helped quell tensions and give local and national leaders a bird’s eye view of how the election was unfolding. 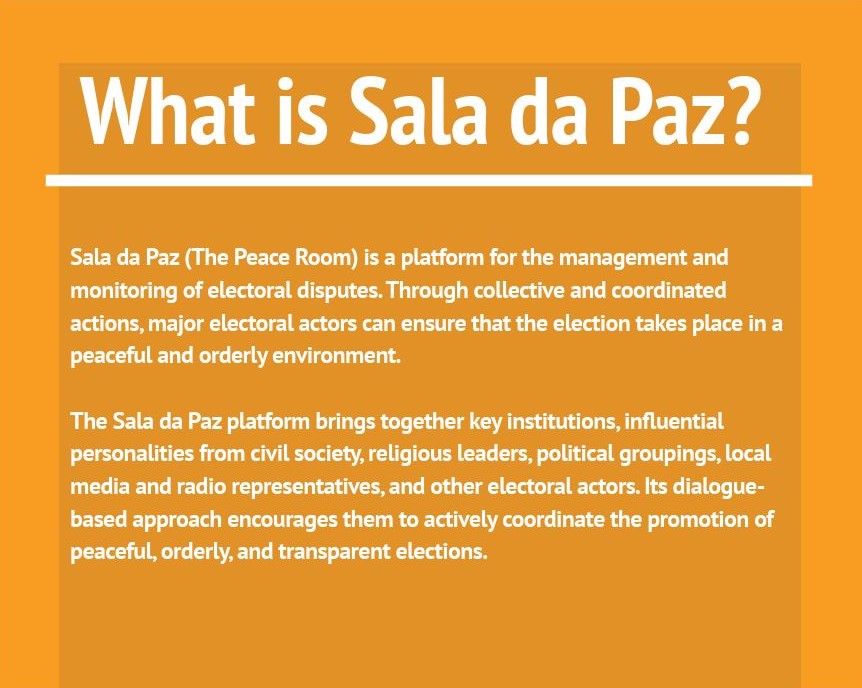 The role of Sala da Paz in the 2019 election

Ahead of the October vote, Sala da Paz has been monitoring the voter registration process, the submission of candidacy applications, and the election campaign so far. On election day, and during the collation and dissemination of the results, Sala da Paz will continue its work. Its work at each stage performs a function to help stabilise the electoral process.

For example, Sala da Paz member organizations support voter registration initiatives in their constituencies to widen participation during the election. They also observe candidate registration so they can make recommendations for the next electoral period to improve efficiency and transparency. There is also the monitoring of the campaign period and election day, when Sala da Paz convenes its members for dialogue on events as and when they happen.

These activities mean that not only do civil society organizations, parties, and institutions have a space to openly discuss and resolve any disagreements, but they have access to up-to-date information that is independently verified.

Want to know more about how Sala da Paz is supporting the elections? You can follow Sala da Paz on Facebook to keep up to date on Mozambique’s elections, and there will be regular announcements on the IMD Mozambique website to ensure you’re up to date.