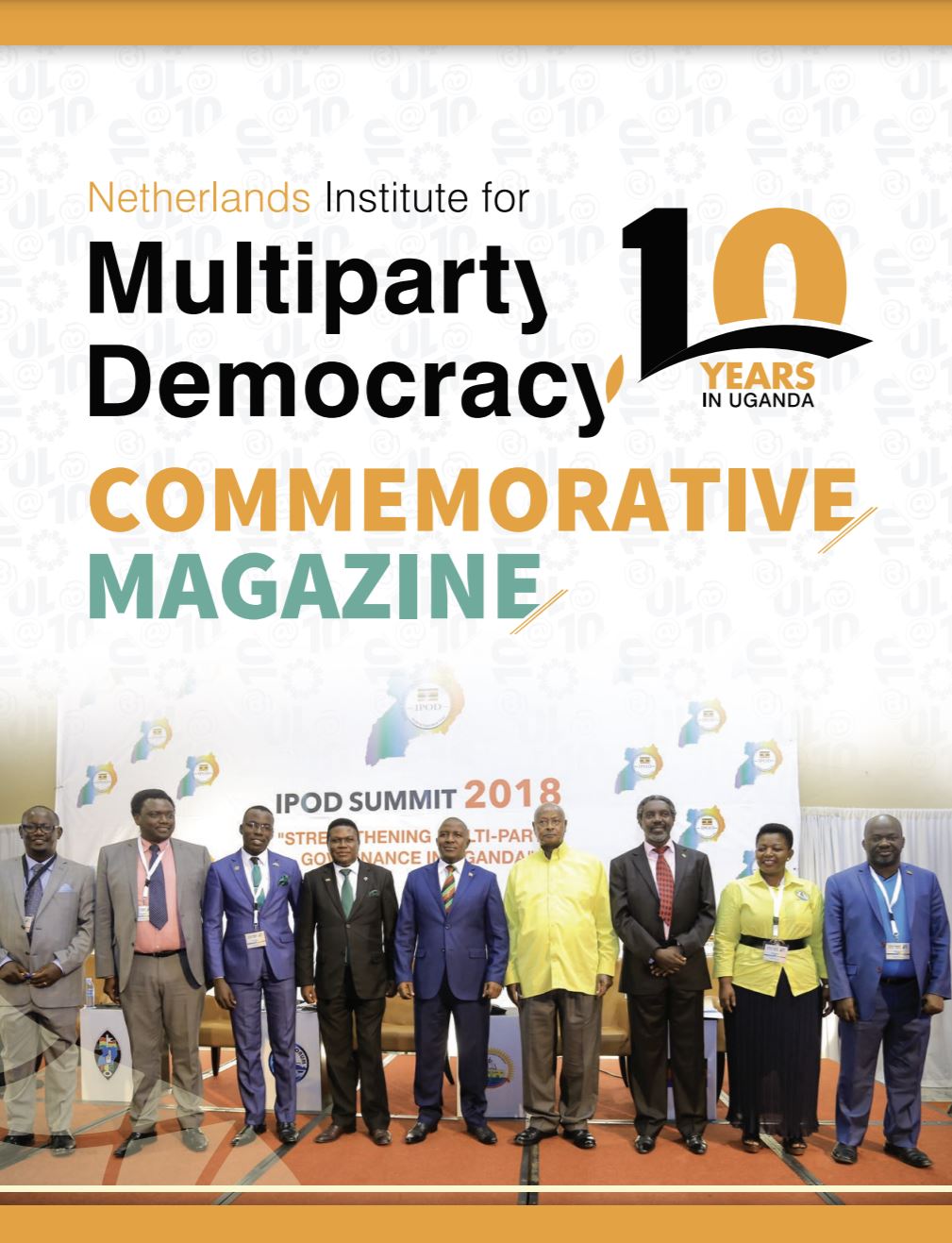 NIMD started its work in Uganda 10 years ago. Political parties invited us directly to work there. Because they needed experts in multi-party governance during the country’s transition to multiparty democracy.

Since then, NIMD’s main aim in Uganda has been to foster a strong, inclusive and vibrant democracy. That means we strengthen parties to be more programmatic and responsive; promote the political participation of women and youth; and facilitate dialogue between parties, civil society, and other stakeholders.

This magazine is a celebration of NIMD Uganda’s work over the past 10 years.

Political economy analysis (PEA) is a lens to help us see how political change can happen. It allows us to zoom into the political game and its playing field. Through it, we can look beyond elections, political decisions and developments, and see why they occur and who drives these processes. We see the rules and incentives of the game, rather than only its players.

PEA improves our ability to react to changes in the political context, through flexible and adaptive programming, and supports us as we develop cutting-edge interventions and influencing strategies.

This special edition of international development magazine Vice Versa celebrates the successes of a diverse group of women from across the world.

Our protagonists come from all different sectors – including politics and civil society. Despite political, social and financial pressure, these outspoken women remain committed to an equal and inclusive society.

The Special Edition on Gender was created by Wo=Men and Vice Versa, in collaboration with NIMD, Amref Flying Doctors, Cordaid, Milieudefensie, PAX, WECF, GAGGA, and the Fair, Green and Global Alliance.

Please note that the magazine is in Dutch.

In this special issue of renowned international development magazine Vice Versa, NIMD and our partners were invited to share their knowledge on the state of democracy ahead of the new decade.

Inside is a featured article in which NIMD Executive Director Thijs Berman challenges the growth of populism. You can also read analysis of how democracy is developing in many of NIMD’s programme countries, including Myanmar, Mozambique, Uganda and Tunisia.

The digital version of the Democracy Special is available for download via the button below.

Please note that the magazine is in Dutch.

“Women play in the same soccer field and share the same spaces as men but with other rules, more unfavourable conditions and all the odds against them.”

Using her wealth of knowledge and extensive experience working with male and female politicians, Virginia García Beaudoux takes us on a deeply personal journey to set out the work that still needs to be done to ensure gender parity.

Through a series of interview with Swedish and Dutch political figures, Dancing Backwards in High Heels offers a unique glimpse into what it can mean to be an ambitious woman in an environment still dominated by males and shows that, even in countries that have made great progress towards gender equality, there is still a long way to go. With specific and well-considered recommendations, García Beaudoux stresses, however, that there is hope for the future, and sets out the pathway towards greater equality.

Politics Meets Policies: The Emergence of Programmatic Political Parties (Myanmar language translation 2016) is a Myanmar School of Politics and International IDEA co-publication and Myanmar translation of the latter’s 2014 book by the same title. It is based on the work carried out by three teams of political scientists who examined what drives and strengthens programmatic politics, even under unlikely conditions. The publication offers food for thought for political parties that are struggling to shift from personality-based or clientelistic-focused approaches—to more programme-based strategies as they reach out to voters.

This handbook was produced in the framework of the EU-funded programme INSPIRED – Integrated Support Programme for Inclusive Reform and Democratic Dialogue. The programme operated at two levels of intervention: In Ghana, Kyrgyzstan, Moldova and Tunisia, national dialogue projects promoted cooperation between the key stakeholders on a collectively identified policy issue. At the global level, INSPIRED aggregated and coordinated the outcomes of these projects with a view to developing an operational model for facilitating inclusive policy dialogue processes in contexts of democratic transition. INSPIRED was implemented by the European Partnership for Democracy in collaboration with seven partner organisations:

NIMD has become increasingly involved in fragile and conflict-affected settings (FCAS), or settings in which the political environment is extremely polarized and divided due to a lack of trust among political actors.

NIMD’s strategies on interparty dialogue and capacity building are highly valued in these settings, where the strengthening of political legitimacy is viewed as a pre-condition for sustainable peace, stability, and development.

In ‘Our Stories’, you can read about NIMD’s experiences working in various fragile and conflict-affected settings, including Burundi, Honduras, Colombia, and Mali. You can download the publication containing all of these stories, or you can download each story individually.

This publication, funded by the Embassy of the Netherlands, highlights the objectives, approach, and obstacles that democracy schools in Burundi face.