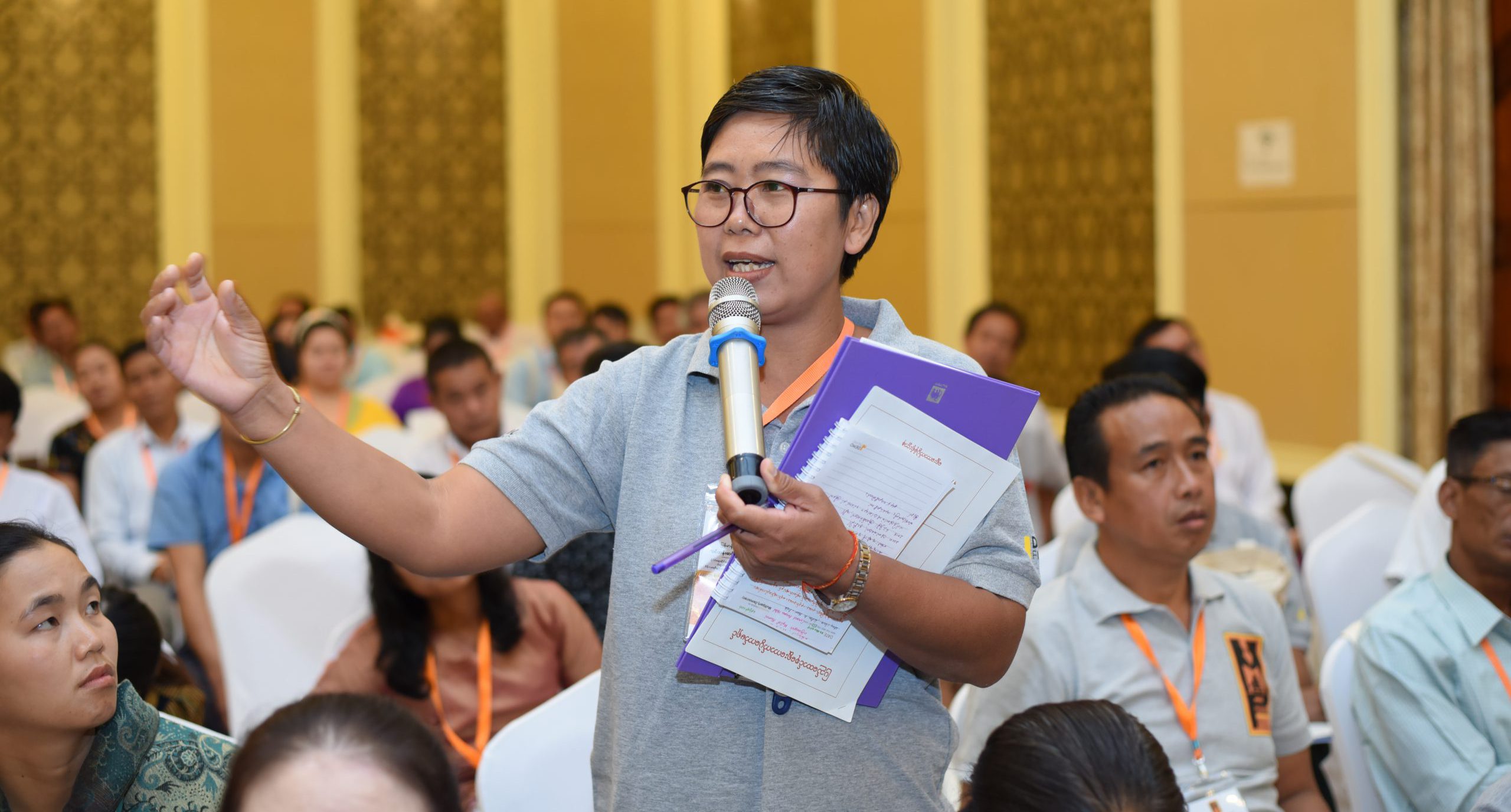 Empowering women leaders at the Myanmar School of Politics

Mu Nang Wai Wai Htun sits on the Shan State-level Central Executive Committee of the Kayan National Party. She became active in politics at a young age, joining the Catholic Youth Council in 2000 – until the military regime shut down her activities and attempted to arrest her.

Mu Nang Wai Wai Htun met NIMD as a participant of the Myanmar School of Politics (MySoP), which she joined in 2017 to build the knowledge and networks for supporting her own political career. Now she is seeking election as an MP during Myanmar’s 2020 state level elections – only the third time such elections have been held since democratic reforms began in the 2010s.

A risky time to enter politics

Mu Nang Wai Wai Htun grew up in a rural area of Myanmar’s Shan State and was decidedly public-minded, despite not being given the chance to finish her own education. That experience taught her that she could make the most difference by engaging with young people in her community.

“Although I could not finish my own high school education, I decided to become a volunteer teacher. As teacher, I engaged with Kayan youth about citizenship and how to be a responsible and active citizen, and I did my best to set an example to those young people. For instance I joined the Catholic Youth Council in 2000 and became its leader a couple of years later, so I could support local causes that mattered to me.”

Mu Nang Wai Wai Htun’s experience as a teacher influenced her approach to leading the Catholic Youth Council. “As leader of the Council I organized citizenship education training for other members However, it was during this time that I was faced with the reality of how restrictive Myanmar’s political regime was. Soon after our activities started to grow, the military regime attempted to arrest me and prohibited us from organizing.” Mu Nang Wai Wai Htun’s political activities were thus brought swiftly to a halt and she left the Council in 2005.

It was only in 2014 that Mu Nang Wai Wai Htun could become politically active again. “I did not join a party, but I wanted to make a change. Therefore I helped the National League for Democracy to mobilize voters. After the elections, I decided to join the Kayan National Party, defending the interests of my ethnic group. It wasn’t long before I got elected to the Central Executive Committee by my fellow members, which turned out to be the start of my life as a professional politician.”

Learning to be a stronger leader

Mu Nang Wai Wai Htun had reached a position of importance in her party, and wanted to make sure she could deliver for the people who put her there. “I had the passion to work for my people, but in my opinion not yet the right experience. I attended various training sessions across Shan State, when I met two politicians who told me of an organization called MySoP. The MySoP alumni explained MySoP’s multiparty approach and that its students were picked on merit, which convinced me that it was a very worthwhile initiative. As soon as the MySoP programme became active in my region, I applied together with a female party colleague.”

It was a conscious choice of her party that Mu Nang Wai Wai Htun and her colleague – therefore two female party members – were put forward to join MySoP. “We agreed that as women’s participation was still very low in our party, and as women’s empowerment is one of the key objectives of our party, we decided to send two female participants. We feel very strong that we should work on that.“

The training Mu Nang Wai Wai Htun received through MySoP’s Democracy School was both theoretical and practical. “Besides my need to learn about theoretical context of politics, I was interested to learn practical skills. For instance, I drew a lot of important lessons from training on public speaking and creating key messages, which will help me communicate and connect with my constituents. The courses on debate techniques will enrich my contribution to Myanmar’s political culture. Everything I learn from MySoP is useful to me, because I started as a politician with very little experience. Now, I can directly apply the skills I learn in real life.

“Yet most importantly, what I think MySoP really gave me and my fellow alumni was the opportunity to build relationships with politicians from different political parties. This multiparty setting enables us to strengthen our trust and cooperation across party lines, something not possible a generation ago in Myanmar.”

In a country where the level of trust between political parties is still a great challenge, MySoP is one of the few organizations able to create and maintain a safe space for political dialogue. This is essential to support the country’s democratic transition and strengthen inclusive democratic processes.

Building her own cross-party network

Next to the Democracy School, an important other pillar of MySoP’s work is to maintain relationships with former participants through the alumni network. The largest meeting of alumni takes place at the annual MySoP Alumni Forum. Mu Nang Wai Wai Htun joined politicians across Myanmar for the three-day 2019 Forum held in Nay Pyi Taw, where they discussed the themes of electoral strategy and political campaigning.

“The topic of this year’s Forum was especially relevant in regard to the upcoming 2020 elections. I am running as a candidate, so the workshops really inspired me. There are so many things I have learned these three days, but some points really stood out. For instance, the importance of analyzing the political landscape, learning how to manage and finance a campaign, and how to be a good candidate. I learned that in order to get elected I need to build trust, communicate my vision and establish a good relationship with the public.

“Before the courses I knew little about effective political campaigning. The only experience I had was from volunteering as an assistant to mobilize voters for to the National League for Democracy in 2015. I did not know the ins and outs of setting up your own campaign, nor did I not know how to manage and strategize for a campaign. Now that I do, I feel much more confident to run for the 2020 state-level election as a candidate myself.”

During its 2019 edition, the MySoP Alumni Forum brought together over 200 participants from 39 different political parties. “I want to thank MySoP, NIMD and Demo Finland for creating these special environments. One of the best parts of Alumni Forum is the time we get to spend in a relaxed and safe atmosphere. We have time to (re)connect with colleagues in a trusted setting, to share the latest developments in our states, parties and families. The bonds we create and the knowledge we receive we take back home. It does not stop there, when I will spread the knowledge.”